Review: The Women in the Walls - Amy Lukavics

The Women in the Walls by Amy Lukavics, published by Simon and Schuster on 6th October 2016


Goodreads synopsis:
Lucy Acosta's mother died when she was three. Growing up in a Victorian mansion in the middle of the woods with her cold, distant father, she explored the dark hallways of the estate with her cousin, Margaret. They're inseparable—a family.

When her aunt Penelope, the only mother she's ever known, tragically disappears while walking in the woods surrounding their estate, Lucy finds herself devastated and alone. Margaret has been spending a lot of time in the attic. She claims she can hear her dead mother's voice whispering from the walls. Emotionally shut out by her father, Lucy watches helplessly as her cousin's sanity slowly unravels. But when she begins hearing voices herself, Lucy finds herself confronting an ancient and deadly legacy that has marked the women in her family for generations. 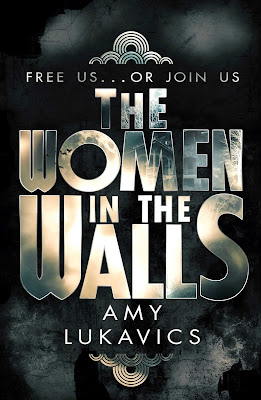 Review:
‘The Women in the Walls’ was quite frankly terrifying and pretty gruesome. If you are a fan of the horror genre and are looking for a book which will make your skin crawl, then look no further. The release of this title is perfectly timed to coincide with Halloween, although I strongly wouldn’t recommend reading it without all the lights in the house being on and maybe someone to hold your hand!

Personally, I’m not a big fan of horrors and although I enjoyed Amy Lukavic’s debut novel ‘Daughters Unto Devils’, there was something decidedly unsettling about this story which didn’t sit well with me. The story itself centres around Lucy Acosta, who after the death of her mother has grown-up with her Aunt Penelope and Cousin Margaret by her side. Living on a huge estate, things start unravelling swiftly from the beginning. First the Cook is found hanging, then her Aunt disappears into the woods and then Lucy’s cousin starts acting out of character. It almost feels like there is a malicious presence lingering in the house.

Lucy is an interesting character but a lot of the time I couldn’t quite make up my mind whether I actually liked her or not. She has a difficult relationship with members of her family and hides a big secret which gave some further insight into her personality. However, I was never sure whether I could entirely trust her.

This was a fairly short book, so the story started off at a breakneck pace and never really slowed down. It’s not entirely clear what is happening until the second half of the story and by then you just want it to stop (or at least I did!). There are some incredibly gruesome moments in the book and I have to give a nod to Amy Lujkavic for the way that she describes these scenes in such detail that you will feel like every hair on your body is standing on end.

Having had some time to think about it, I feel that it’s probably more the fact that the genre didn’t suit me, than that this is a bad read. When I was a teenager, I never liked the Goosebumps series by R.L. Stine either (I think I scare myself too much) so I was always going to struggle a bit with anything like this. If, however, you enjoy a story which will give you the frights then this might be just the one for you.