Synopsis:
Tom's family have moved into their dream home. But pretty soon he starts to notice that something is very wrong - there are strange messages written on the wall and locks on the bedroom doors. On the OUTSIDE.

The previous owners have moved just across the road and they seem like the perfect family. Their daughter Amy is beautiful and enigmatic but Tom is sure she's got something to hide. And he isn't going to stop until he finds the truth behind those locked doors. . .

Will their dream home become a nightmare? 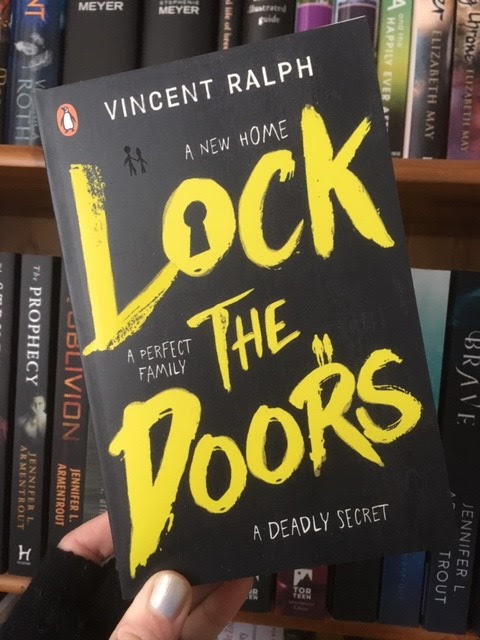 Review:
Before I started reading ‘Lock the Doors’ by Vincent Ralph, I wasn’t sure if it was going to be a YA horror or a thriller. After the first few chapters, I knew that I was going to be treated to a twisty, dark story which was full of suspense and which featured some very heavy, emotional issues. As I read on and the plot deepened and gradually began to unwind, it perfectly mirrored the way in which the main character Tom, started to discover the truth about his new home and the family that previously lived there.

This review is difficult to write because I really do not want to give anything away which would spoil a new reader’s enjoyment of the book. I definitely think that the less you know about it in advance, the better off you will be. This is a story that creeps up on you bit by bit and by not knowing the truth, it makes the revelations, when they come, even more shocking. Tom was a great central protagonist and it was certainly interesting to see a character struggling with OCD. This isn’t something that I’ve come across before in YA books. Although at the start Tom seems pretty quiet and dare I say it, a bit timid, as he reveals more about himself, you realise that he has been through a huge amount of childhood trauma but grows in confidence so much throughout the story. He is dogged and determined as well, which means that when he befriends Amy, the girl that used to live in his new home, he is fascinated by the secret that he believes she is hiding and determined to help her.

I absolutely love YA thrillers and while I wouldn’t call this a typical book in the genre, it has a lot of the elements that I enjoy. Particularly the slow build of suspense and the desire to keep on and on reading, to try to get to the bottom of the mystery. There are some hard-hitting themes in the book which were well handled by the author and which tackle some quite difficult and emotive issues. I didn’t guess anything that happened and was definitely kept on my toes from beginning to end.
Posted by Samantha (A Dream of Books) at 00:28