Deception by Lee Nichols, published by Bloomsbury on 5th September 2011

Goodreads synopsis:
When Emma Vaile’s parents go missing while away on a mysterious business trip, she’s left all alone in her creepy old house. But her brother’s very cute best friend, Bennett Stern—Emma’s knight in J. Crew armor—arrives unexpectedly to whisk her away to New England. There, Emma settles into his family’s museum-like mansion and enrolls at an old-fashioned private school. She quickly finds friends in the popular legacy crowd at Thatcher and spends her free time crushing on Bennett.

But the eerie visions she’s been hiding from everyone have gotten worse. Emma has memories of Thatcher that she can’t explain—it’s as if she’s returning home to a place she’s never been. Finally, Emma confides in Bennett and learns she is a ghostkeeper, a person who can communicate with ghosts. Bennett brought Emma to Thatcher to protect her, but now he needs her help tracking an other-worldly murderer. 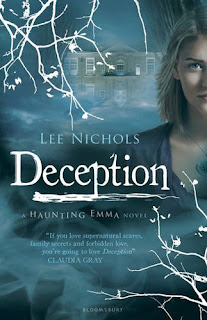 Review:
'Deception' is the debut YA novel from British author Lee Nichols.  It's the first book in a trilogy which promises much and delivers in spades!  I didn't know much about it before it arrived but some of my favourite authors Carrie Jones and Claudia Gray provide plenty of plaudits on the front and back cover which grabbed my attention prior to beginning to read the opening chapter.

The story is told narrated in the first person by protagonist Emma whose family have left her in the lurch, leading to her being whisked off to stay with her guardian Bennett Stern, who also happens to be a friend of her brother and the guy on which Emma has always harboured a huge crush.  Living in a new house and having to attend a new school is bad enough but Emma is also experiencing weird sensations which she can't explain and believes she may even be able to see ghosts.  Emma eventually learns about her own abilities and has to come to terms with the fact that she's a ghostkeeper but with powers far beyond anyone else.

One of my favourite things about this book was the crackling chemistry between Emma and Bennett, who she has been in love with since she first laid eyes on him.  Like every girl, she endlessly imagines what it would be like to kiss the object of her affection and become his girlfriend and I have to say that I was really rooting for the two of them because they seem perfect for each other.  There was a sub-plot romance involving Coby, a local boy, which had an unusual outcome but it was obvious that Emma's heart lay elsewhere.  It will be interesting to see how Lee Nichols develops their burgeoning romance in future books which I'm certainly going to be glued to.

Bennett lives in a wonderfully old museum like mansion in New England with its very own set of ghost servants.  Not only was this a suitably atmospheric setting for the story but I adored the ghost characters - Anatole, Nicholas, Celeste and the Rake, who become like a proper family to Emma.  I particularly loved Nicholas who Emma treats like a younger brother.

I thoroughly enjoyed the unravelling of the mystery about the ghostkeepers and their different abilities.  This was well developed and explained in enough detail so that I was able to grasp it quite quickly.  I would have liked to have known more about Emma's family and their own role as ghostkeepers but by not laying everything bare in the first book, it keeps the suspense high for the sequel.

This book had it all including ghostly happenings, a spine-tingling romance, an intriguing mystery and a gripping finale.  I need to get hold of the second book in the series which is called 'Betrayal' pronto, so I can see if Emma finally gets her boy!
Posted by Samantha (A Dream of Books) at 00:00