Goodreads synopsis:
As far as romantic pairings go in the year 2195, you don't get much more unlikely than an upper-class schoolgirl and a poor miner from enemy tribes. Filter in the fact that he's a zombie, and you're definitely talking about star-crossed love.

Dearly, Departed is a cyber-Victorian/steampunk romance that takes place in the shadow of a new ice age. Nora Dearly, a mouthy teenage girl and apparent orphan, leaves school for Christmas - only to be dragged into the night by the living dead. Luckily for her, though, the good ones got to her first. From her reanimated rescuers she learns not only that zombies are roaming the countryside, but that her father is one - and that he's in terrible trouble. She also meets Captain Bram Griswold, a noble, strong, and rather sweet undead boy for whom she starts to fall.

Meanwhile, her best friend, Pamela Roe, is just trying to carry on with life as best she can in the wake of Nora's disappearance - when she ends up killing an evil zombie in self-defense. Pam is galvanized into action, and ends up leading a group of survivors as the city of New London is thronged by the ravenous dead.

Upon hearing of Pamela's plight, Nora and Bram set out to rescue her friends, find her missing father, and maybe just save what's left of the world. 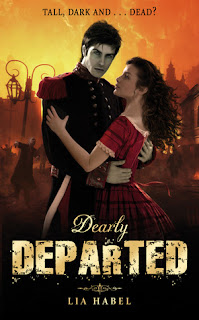 Review:
I've seen some amazing five star reviews of this book which had me really excited when I received a lovely, shiny new copy.  The cover made me think that it was going to feature a hot romance with a swoonworthy hero but on finishing it last night I have quite mixed feelings about it.  I will read pretty much anything from any genre but steampunk isn't something that I've tried before and so it took me until a good half-way through the book to get used to the writer's style.  It's a strange mix of steampunk and cyber-Victorian with zombies thrown in by debut author Lia Habel.

'Dearly Departed' is set in 2195.  Following a series of catastrophes and natural disasters, the world is a completely different place.  People have reverted back to Victorian etiquette and values, living in a country renamed as New Victoria.  A second movement called Punk has also developed, with the Punks rallying against the social structure.  They are made up of people who have been infected by what's known as the Lazarus syndrome, which has turned them into zombie-like creatures.  Normally, I'm quite keen on zombie novels.  I love Charlie Higson's series (including books 'The Dead' and 'The Enemy') and zombies make a nice change sometimes to vampires and werewolves!  In 'Dearly Departed' though it didn't entirely work for me.

The focus of much of the novel is on Bram, who is living life as a zombie and Nora Dearly, who is kidnapped to keep her safe from those who want to get their hands on her for nefarious purposes.  To become completely engaged in a book then I have to love the main characters.  With Nora and Bram I struggled to connect with them and their developing romance. I didn't find the relationship between them entirely convincing and this affected my overall enjoyment of the book.

The story is also told through the eyes of alternating characters and I found this made it quite confusing at times.  It also meant that the narrative never flowed properly.  I continually had to check which character was narrating a particular chapter and this caused the plot lines to jump around quite a bit and the story to feel slightly disjointed.

I haven't given up on steampunk yet but on the other hand I'm not sure that it's going to be for me.  I thought that Lia Habel did a good job of incorporating aspects of the old with the new and the setting was pretty incredible but this book just didn't bowl me over. If you are a fan of zombies however and you're looking for something unique and different then you might like to give it a try.
Posted by Samantha (A Dream of Books) at 00:00