Jaws of Death by Paul Adam, published by Corgi on 4th August 2011

Goodreads synopsis:
His father is missing presumed dead and his mother is serving a twenty-year sentence for his murder, but teenage escapologist Max Cassidy is certain everybody is wrong – about both things . . . And now, his quest to find the truth has become very dangerous . . .Max learns that his dad was part of a secret global organisation, the Cedar Alliance. Desperate to find him alive, he seeks help from the other members of the group. But they are scattered across the world – and then they start disappearing one by one . . .Escapology is dangerous but not nearly as dangerous as real life... 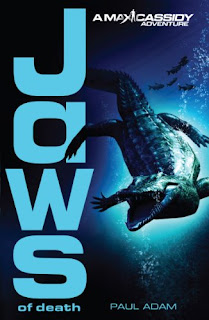 Review:
This is the second Max Cassidy adventure in a planned trilogy from author Paul Adam.  I have been waiting for this sequel to 'Escape From Shadow Island' for what seems like months and months.  I stumbled across this series by accident but so loved the characters and the writing and the incredibly exciting plot that I was hooked almost after the first page.  It will hold enormous appeal for those fans of Charlie Higson's Young Bond and Anthony Horowitz's Alex Rider books who are mourning the prospect of the end of two awesome series and looking for something to fill the gap.  However, although similar in terms of the fact that the main character is a teenage boy with above average skills, wit and intelligence, it is also extremely unique with a captivating plot all of its own.

Max Cassidy is a fourteen year old Houdini following in the footsteps of his famous father Alexander Cassidy.  He's determined to find out what happened to his father on Shadow Island and in the process hopes to prove his mother's innocence and free her from the twenty year jail sentence she's serving for supposedly killing her husband.  What I love about Max is that he doesn't really have any special training at all (apart from his talent at escapology) and he doesn't have a whole array of gadgets at his disposal but he tends to get the upper hand because he always thinks one step ahead of everyone else.  He's also very clever and uses his wits and skills to best the bad guys!

Paul Adam really racks up the tension to an excruciating level throughout this book.  My palms started getting sweaty as I became totally enthralled and gripped by the continual abrupt turns and unexpected twists in the plot.  The story takes place in Britain, as well as Borneo and Stockholm.  The wide range of settings kept the story moving along at a brisk pace and added several unique obstacles for Max to overcome.

I loved this book and the whole series so far.  The only thing disappointing is that there's only more book to go!  Perhaps Max could be recruited by a special organisation and so his adventures could go on and on, or even better...a Max Cassidy and Alex Rider cross-over spin-off!  Although this title will probably mainly appeal to a male audience it really has universal appeal and will I'm sure, attract many male and female fans looking for a thrilling and exciting read.
Posted by Samantha (A Dream of Books) at 00:00