Dark Inside by Jeyn Roberts, published by Macmillan Children's Books on 2nd September 2011

Goodreads synopsis:
Since mankind began, civilizations have always fallen: the Romans, the Greeks, the Aztecs…. Now it’s our turn. Huge earthquakes rock the world. Cities are destroyed. But something even worse is happening. An ancient evil has been unleashed, hooking on to weakness, turning the unwary into hunters, killers, crazies.

Mason: His mother is dying after a terrible car accident. As he endures a last vigil at her hospital bed, his school is bombed and razed to the ground. Everyone he knows is killed.

Aries: A school bus, an aftershock and a crash. Pulled out of the wreckage by a mysterious stranger, she’s about to discover a world changed forever.

Clementine: An emergency meeting at the town hall that descends into murderous chaos. Outside the rest of their community encircle with weapons. How can those you trust turn into savage strangers?

Michael: A brutal road rage incident. When the police arrive on the scene they gun down the guilty and turn on the by-standing crowd. Where do you go for justice when even the lawmakers have turned bad? 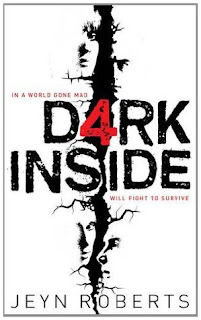 Review:
I actually missed out on a lot of the hype surrounding 'Dark Inside' which meant that when I received a copy of the book for review I wasn't initially sure if it was going to be my sort of thing.  But I like to give everything a try so I picked it up and found that from the very first page I was well and truly hooked on the exhilarating and heart pounding apocalyptic story that debut author Jeyn Roberts had woven.  This is definitely one of those books that will make you not want to leave the house until you've finished it.  It's a story that will make your palms sweat and your heart race!

It actually reminded me quite a bit of 'The Road' by Cormac McCarthy which is one of my favourite adult novels and is another one of those books which defines the word gripping.

A series of earthquakes have caused total devastation across America.  They've also let loose something which is causing people to suddenly be struck by an uncontrollable rage which leads to them murdering and killing everyone around them.  The story is told via four main characters who have survived the initial quakes and are now attempting to survive in a changed world where death lurks around every corner and where no one can be trusted.  Sometimes in books which have multiple narrators you occasionally get a weak link or a character that you're not quite so keen on.  In 'Dark Inside' I found each of the teenagers narratives enthralling and all of them sharply defined and brilliantly characterised.  Clementine, Mason, Aries and Michael are each left to struggle against odds which are clearly stacked against them as they try to stay alive.  There's also the enigmatic, mysterious and handome bad boy Daniel who may well hold the key to the horror which has struck America and the sweet and charming Chickadee who will touch your heart.

The fact that there appears to be no reason for the murderous intent which is driving people, makes it even more shocking as it's hard to understand or explain.  The teenagers have to do some extraordinary things to ensure that they're not caught by the evil 'Baggers' who are vicious and bloodthirsty and whose only purpose is to catch and then kill people.  I enjoyed the gradual convergence of the teens stories and the way in which they started to operate as a team and not just as lone survivors.

As I'm not really a fan of the horror genre, I thought that I might find this book too scary.  However, although my stomach was in my mouth for the majority of the story, I lived every second along with the characters and I felt bereft when it was over.  This is truly an oustanding novel by a very exciting debut author which blew me away and is without a doubt one of my favourite books of the year so far.  Jeyn Roberts is currently working on the sequel to 'Dark Inside' and I for one can't wait!  I'm going to be counting down every second until it's release.  This is definitely the book to get all those reluctant teen readers to read!
Posted by Samantha (A Dream of Books) at 00:00