Goodreads synopsis:
In this riveting and emotional conclusion to the thriller-romance Janie series, that started with The Face on the Milk Carton, all will be revealed as readers find out if Janie and Reeve’s love has endured, and whether or not the person who brought Janie and her family so much emotional pain and suffering is brought to justice. 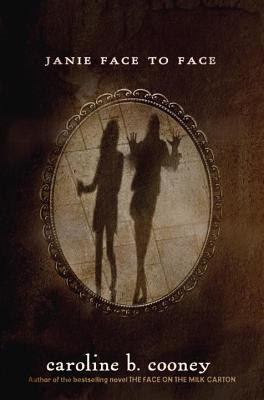 Review:
'Janie Face to Face' is the fifth book that Caroline B. Cooney has written about the girl who discovered her face on a milk carton, leading to revelations about who she is and who her real family are.  I remember reading this series and being both gripped and horrified by Janie's story.  I couldn't even begin to imagine how you would feel to find out that you had been kidnapped when you were a child and the people you have called Mum and Dad all your life, aren't your real parents after all.

I didn't realise that another book in the series had been planned and although I was a little dubious at first about yet another instalment, I'm now glad that Caroline B. Cooney finally provided Janie and her readers with the closure that they've been looking for.  I feel satisfied that not only has her story been properly concluded but also that we now know what happens to her and to her kidnapper.

The narrative alternates between the point of view of Janie herself, as well as the notorious Hannah; the person who was responsible for taking a little girl away from her family all those years ago.  It was interesting to see how Hannah viewed her own actions but these sections of the book also gave me chills because of what I knew she was capable of.

The story is about Janie finally coming to terms with what happened to her and learning to put herself first for once, instead of worrying about her parents from both sets of families.  After so many years of questioning her own identity, she has now grown into a mature and responsible young woman who wants to put the past behind her and focus on her future.  Without wanting to give anything away, Reeve, the boy next door turns out to be a huge part of that future and I enjoyed seeing him and Janie reconnect.

When I was a teenager I read all of Caroline B. Cooney's books and now I'm an adult I can truthfully say that I still enjoy them and appreciate her writing enormously.  Fans of the series will definitely want to read this concluding book about the girl on the milk carton, not only for nostalgic reasons but also to put to rest the terrible events that happened to Janie so many years ago.
Posted by Samantha (A Dream of Books) at 00:00