Just For Now by Abbi Glines, published by Simon and Schuster on 25th April 2013

Goodreads synopsis:
The day Preston Drake figured out that wealthy women paid well for a set of tight abs and a pretty face his life turned around.  The run down rat-infested trailer he had shared with his alcoholic mother and three younger siblings was now only a place he visited to pay the bills and stock the pantry with food.

He no longer worried about his family starving or living without electricity. The money he made entertaining rich older women more than covered his family’s needs and his own. He had it all figured out.

Amanda Hardy wished her knees didn’t get weak when Preston walked into a room. She hated the fact her heart raced when he flashed his smile in her direction. He had a different girl in his bed every night. He was the kind of boy a smart girl ran from. So, why was she coming up with ways to get close to him? Even when it was obvious he wanted to keep her at a distance.

Maybe her heart knew something the world didn’t. Maybe Preston Drake was more than just a pretty face. 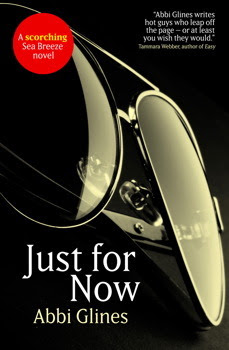 Review:
Abbi Glines delivers another dose of Sea Breeze in the fourth book in the series.  This time around it's the turn of bad boy Preston Drake to find out that true love may not be so impossible after all.  Although I knew a little about Preston before starting his story, namely that he is the best friend of Marcus Hardy and seems to have a different female hanging off his arm every night, I didn't know much about the real Preston and who he is underneath his confident exterior.  I love the fact that Abbi Glines can take a character who on the surface may appear to be slightly one-dimensional and make you stop and think twice about them.  By the end of the book, he'd really grown on me and I'd changed my opinion about him completely.

The reason why Preston behaves the way he does can be partly traced back to his family who we finally get to see.  The scenes which he shared with his younger brothers and sister were some of my favourite in the book and I like the way that these chapters showcased the caring and compassionate side of him.  He has had to be responsible for their welfare because his mother is unfit to look after them and therefore he tries to be both brother and father to them.

There were subtle hints in 'While It Lasts' that something may have been brewing between Preston and Marcus's younger sister Amanda.  She has had a huge crush on him for what seems like forever but doesn't think he could ever be interested in her properly because she doesn't fit the mould of the type of girl that usually turns his head.  I have to say that while I adored Willow and Eva from the start, I wasn't quite so keen on Amanda.  I felt like it took me a long time to see the compassionate side of her and not just respond to her as the little sister who needs looking after.

I would never have thought that Preston and Amanda would make a good match but again Abbi Glines works her magic and turns their relationship into a budding romance which was all kinds of wonderful.  He opens up to her about his past and his family and she in turn is there when he needs her the most.  I thought they became a great couple who genuinely bring the best out in each other.

This was yet another fabulous instalment of a series which has become a huge favourite of mine.  I adore the romance and the characters and the fact that I can get completely lost in these books.  I believe that there will be another story to come and I can't wait because I know already that I'm going to love it!