Review: Because of Low - Abbi Glines

Because of Low by Abbi Glines, published by Simon and Schuster on 25th April 2013

Goodreads synopsis:
Marcus Hardy had hoped to enjoy a year away at college while he put the summer he'd rather forget behind him. But instead, he's jerked right back his home town of Sea Breeze due to a family crisis. His dear ol' dad found himself a girlfriend only a few years older than Marcus. So now his sister needs help dealing with their mother who is falling apart. The only bright spot to returning is the fascinating red head who sleeps over at his place several times a week. There's just one thing though - she's sleeping in bed with his new roommate, Cage York. 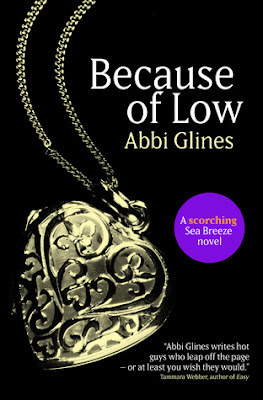 Review:
'Because of Low', the second book in Abbi Glines Sea Breeze series, is a steamy New Adult romance that was so good I devoured it in one sitting and then went back and read all my favourite parts again.

Having previously read 'The Vincent Boys' which I utterly loved, I wasn't sure if any fictional guy was going to be able to steal my heart away from Beau and Sawyer, and yet when Marcus Hardy entered the picture, I was a goner.  Gorgeous, adorable, well mannered and sexy as hell, Marcus sure knows how to treat a girl right.  After he falls head over heels for Willow, or Low as she's known, it seems that romance may be on the cards, except for the fact that his roommate Cage has declared that Low is the girl he's going to marry.

I absolutely adored seeing how the romance between Marcus and Low developed throughout the course of the book.  Sparks fly when they are together and the attraction they feel for each other is evident from their first meeting.  Of course there are a lot of ups and downs for them to go through first but I think in the end, all of that actually makes them stronger as a couple and proves that if they can survive their own hang-ups, as well as the problems caused by their families, then they are meant to be together.

I enjoyed the fact that the narrative alternates between the two characters, so we get a male and female perspective on events.  Abbi Glines writes both points of view equally well which is something that must be very hard to do.  It was interesting to see how one situation could be viewed so differently, as well as how both characters feel about each other at various points in the story.

There are some seriously steamy moments in the book, definitely making this a read for a slightly older audience.  There were times when my heart was thumping out of my chest and my palms were sweaty.  But I loved it as the romantic parts were so genuine and real.

This was a scorching ten out of ten star read!  Abbi Glines is one of my favourite authors at the moment and I'm desperate to get my hands on all of her books.  I'm looking forward to reading the rest of the Sea Breeze series which features the gorgeous Cage and bad boy Preston.