Hidden by Marianne Curley, published by Bloomsbury on 14th March 2013

Goodreads synopsis:
For as long as Ebony can remember, she's been sheltered. Confined to her home in a secluded valley, home-schooled by her protective parents, and limited to a small circle of close friends. It's as if she's being hidden. But something is changing in Ebony. Something that can't be concealed. She's growing more beautiful by the day, she's freakishly strong, and then there's the fact that she's glowing.

On one fateful night, Ebony meets Jordan and she's intensely drawn to him. It's as if something explodes inside of her--something that can be seen from the heavens. Ebony still doesn't know that she's a stolen angel, but now that the heavens have found her, they want her back. 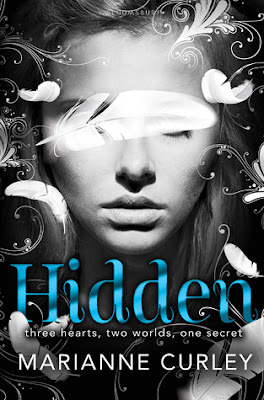 Review:
I really enjoy reading angel stories so I thought that I was going to love Marianne Curley's new book 'Hidden'. The premise sounded right up my street and I delved into it as soon as I got my hands on it.  All the key ingredients were there for this to be a five star book but sadly it didn't quite manage to meet my expectations and on the whole I had quite mixed feelings about it.

The story itself was very slow in the beginning and my interest waned a little after the first couple of chapters.  I feel like everything was pointing towards a possible romance between the two main characters Ebony and Jordan but this was eventually turned on it's head which I have to say threw me quite a bit.  Although I enjoyed seeing events unfold through Ebony's eyes, the chapters which were focused from the point of view of Jordan weren't quite as good.  He seemed at times to be unnecessary to the story, so I'm intrigued to know what part he will end up playing in the next book in the series.

I liked the overall angel mythology at the heart of the plot and the idea of the four dimensions: Earth, Skade, Avena and Peridis.  Curley makes a good job of weaving this into the story and explaining things clearly to the reader.

One of my main issues with 'Hidden' was the dialogue between the characters which often seemed rather stilted.  It meant that I never felt a strong connection to any of the lead protagonists although I had warmed to Ebony by the end.  I was however pretty happy with the introduction of Thane, who provided some of my favourite moments in the book and I'm looking forward to seeing how his relationship with Ebony will develop.

The ending was a real cliffhanger and ended on a high, so although I wasn't completely won over by the first in the series, I'm suitably intrigued enough to want to find out what happens next.