The Academy: Game On by Monica Seles, published by Bloomsbury on 6th June 2013

Goodreads synopsis:
Young tennis star Maya’s dreams have finally come true! She’s got the scholarship. She’s got the drive. She’s on her way from small town to pro career . . . But when Maya starts boarding at the sports training school, her fantasy of the Academy doesn’t quite match the reality – because where there are beautiful, talented teens, there’s plenty of drama. 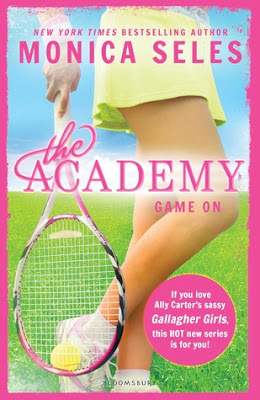 Review:
I really wanted to read this book because I'm a massive sports fan and there just aren't enough YA books out there set in the sporting world.  Another plus was that 'The Academy: Game On' is written by tennis superstar Monica Seles, so I was expecting some interesting insights into what it takes to become a top notch tennis player.

At the start of the book Maya Hart arrives at the academy, where sporting greats are made.  She faces stiff competition but is determined to succeed, as tennis is the only thing she's ever wanted to do.  With access to top coaches and an amazing facility, she starts off as very single-minded but gradually finds her head turned by some of the new people she meets.  There's her arch-rival Nicole, room mate Cleo and new friend Renee, along with hot brothers Jake and Travis who she develops a complicated relationship with.

Personally, I would have liked to have seen more of the tennis aspect of the story.  Considering the fact that the plot is set in a sports academy, at times it felt like events could have been happening anywhere.  I did feel like I gradually began to understand the cut-throat nature that the young people in the book have to develop to try and make it but I would have enjoyed seeing more of their struggles and less of the non-stop partying.

The book is predominantly about making friends, being popular and trying to fit in but also being true to yourself and who you are.  These are all things that Maya has to learn throughout the course of the story as she has to learn to make her own decisions without her parents by her side.

I'm impressed with the efforts of Seles in her first YA offering but I hope that the next book in the series has a little more depth to it, as well as drawing more on her own experiences of being a professional tennis player.