Goodreads synopsis:
Fashion, music and attitudes are changing, and there's nowhere in in the world more exciting. Sherry, Donna, Allison and Pamela have each landed a dream internship at Gloss; America's number-one fashion magazine.

Each girl is trying to make her mark on New York and each finds herself thrown head-first into the buzzing world of celebrity, high-end fashion and gossip. But everything isn't as glamorous as it seems - secrets from the past threaten to shatter their dreams.

They're finding out that romance in New York is as unpredictable and thrilling as the city itself. 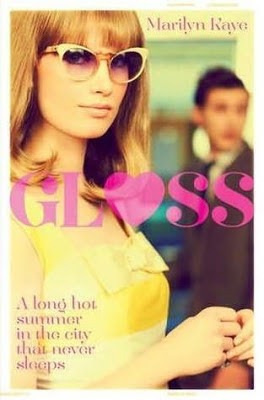 Review:
'Gloss' is set in New York, 1963, where four girls have the opportunity of a lifetime to make their mark at the offices of a fashion magazine.  If you ever fancied interning at Teen Vogue or dream of becoming a fashion journalist then this book will be right up your street.

Each of the four girls in the story: Pamela, Allison, Sherry and Donna, are very different and unique.  I liked Sherry who seems to take just about everything in her stride but I particularly enjoyed the chapters flashing back to Donna's life a year before.  She was my favourite and I thought it was great how she really matured into her own person by the end of the book.  I enjoyed the sense of excitement and anticipation that emanates from each of them.  They have an incredible opportunity to learn, grow and stretch their wings in New York of all places.

I absolutely loved the setting.  I adored the back-drop of the Big Apple and I thought the idea of writing a story set in the sixties worked perfectly because it showed how different the attitudes to women were at that time and how they were not seen as career women but as belonging to the domestic sphere.  Sherry is a good example of this.  She has her whole future mapped out for her - go to college, marry her childhood sweetheart, become a wife and mother - until she begins to discover that there may be other things out there for her too.  She has unwittingly conformed to others expectations but her eyes are well and truly opened during her tenure at the Gloss offices.  It was also interesting to see how men treated women in the sixties and how they didn't necessarily value a woman's' ideas in the same way they would a man.

This was a good and fairly quick read combining several of the things I love - New York, fashion and journalism, with a unique historical fiction twist.
Posted by Samantha (A Dream of Books) at 00:00