Tarnish by Katherine Longshore, published by Simon and Schuster on 20th June 2013

Goodreads synopsis:
Anne Boleyn is the odd girl out. Newly arrived to the court of King Henry VIII, everything about her seems wrong, from her clothes to her manners to her witty but sharp tongue. So when the dashing poet Thomas Wyatt offers to coach her on how to shine at court - and to convince the whole court they're lovers - she accepts. Before long, Anne's popularity has soared, and even the charismatic and irresistible king takes notice. More than popularity, Anne wants a voice - but she also wants love. What began as a game becomes high stakes as Anne finds herself forced to make an impossible choice between her heart's desire and the chance to make history. 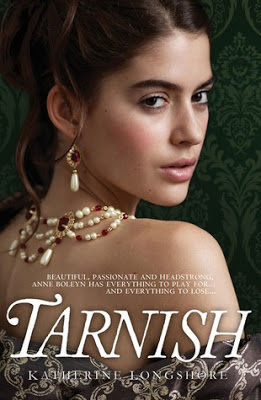 Review:
A few weeks ago I read 'Gilt' by Katherine Longshore which focused on Catherine Howard's marriage to Henry VIII.  Not having read much historical fiction lately, it was a refreshing change which I really enjoyed and I immediately decided that I had to read 'Tarnish' too.

This book is about Anne Boleyn but provides a fresh take on her life by looking mainly at the period where she is a teenager and not yet married to Henry.  Instead the focus is mainly on the relationship between Anne and the poet Thomas Wyatt.  She is trying to secure a place at court and he believes that he can help her to do so.  They have a wager which means that if he helps her and does what he says he can, then she must follow through with his advances but if he loses then he will leave her alone once and for all.  Although already married, he is deeply infatuated with Anne and although she won't always admit it, she in return has feelings for him too.

The crux of it is that Anne does not want to become anyone's mistress.  She wants to be legitimately married and we all know what that desire led to.  It's interesting to see a teenage Anne with all her insecurities and weaknesses, rather than a confident and scheming woman who sets out to snare the King.

The story also looks at her difficult relationship with her family, her sister Mary, brother George and her father who she feels abandoned by.  I enjoyed seeing this angle explored as I didn't know a huge amount about her own family background prior to reading 'Tarnish'.

Most readers will obviously have some knowledge of what happened to Anne in the end but this is still a fresh and new interpretation, aimed at fans of YA historical fiction.  Katherine Longshore has definitely breathed new life into the Tudors and I hope in the future she goes on to write about some of the other English Kings and Queens as well.
Posted by Samantha (A Dream of Books) at 00:00