Review: As You Were - Samantha Summers

As You Were by Samantha Summers, published on 14th December 2012

Goodreads synopsis:
Ronnie and Kalen are finally together, living their life in secret under the radar of the people who want Kalen dead. But when a visit from an old friend sends Kalen away on a rescue mission, Ronnie finds herself plunged back into the world of Project Five Fifteen quicker than she ever thought possible.

It’s fast becoming clear The Agency will never give up their hunt for the boys, and a betrayal closer to home starts a chain reaction that will change everything. Now, caught in a deadly web of lies and deceit, Ronnie is forced to question who she can trust; even the person she once trusted most.

As enemies close in, Kalen’s past threatens to destroy the happiness they sacrificed so much for, and it’s only a matter of time before the ultimate choice must be made… 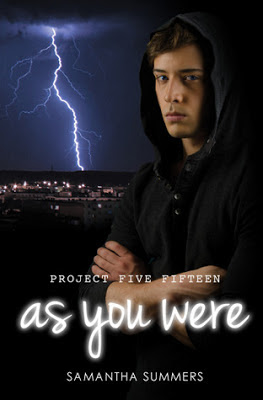 Review:
This is the second book in the Project Five Fifteen series and the sequel to the amazingly good 'First Light'.

I stayed up until 2.00am reading 'As You Were' because I loved it so much and I couldn't bear the thought of going to bed not knowing how the story was going to be concluded.  I adored it even more than the first instalment and it gave me everything I wanted and more.

My absolute favourite thing about the book was the romance between Ronnie and Kalen.  After deciding to run away with him, 'As You Were' picks up with the two of them in the Swiss Alps, enjoying being together but always looking over their shoulders and aware of the threat of danger.  With The Agency still after Kalen and the other boys, they don't know how much time they will have with each other so they try to make the most of every moment.

I love the fact that their relationship is the heart and soul of the series.  Even when they're not together, they are always in each others mind.  Kalen is loving, caring and always protective of Ronnie which I found so sweet.  He's not afraid to make it very clear that she is his girlfriend and I loved the occasional jealous moments he has about her.  He's always aware of the danger he's put her in and wants only for her to be safe and happy.

They are one of my all-time favourite book couples!  Samantha Summers provided me with so many happy moments reading this book because amidst the action and danger there are some wonderful scenes between them.  Their romance is what really makes the series tick for me.

I enjoyed getting to know more about the other boys as well, particularly Ace who is utterly adorable.  The short flash-backs to their time as part of the Project provide intriguing glimpses into their pasts, as well as bringing more understanding about their characters and personalities.  It would be great to see the others finding someone special, as Kalen has.  I would definitely read a spin-off featuring the others.

The whole book is a real roller-coaster of a ride.  Each chapter is packed full of excitement, fraught with danger and laced with romance.  There is also a jaw-dropping revelation at the end which makes me even more desperate to find out what lies in store next.

I'm only sad that as this is a self-published title, more people haven't discovered the series yet.  I read a lot but not often do I feel as obsessive about a book as I do about this one.  Samantha Summers is definitely an author to watch!  The third instalment will be called 'Becoming' but as far as I know there's no release date for it yet.  I don't think I can bear the wait to find out what will happen to all my beloved characters, so I think I'll have to make sure that I have 'As You Were' close at hand for a re-read.