The Fearless by Emma Pass, published by Corgi on 24th April 2014

Goodreads synopsis:
The Fearless. An army, powered by an incredible new serum that makes each soldier stronger, sharper, faster than their enemies. Intended as a force for good, the serum has a terrible side-effect - anyone who takes it is stripped of all humanity, empathy, love. And as the Fearless sweep through the country, forcing the serum on anyone in their path, society becomes a living nightmare.

Cass remembers the night they passed through her village. Her father was Altered. Her mother died soon after. All Cass has left is her little brother - and when Jori is snatched by the Fearless and taken to their hellish lair, Cass must risk everything to get him back. 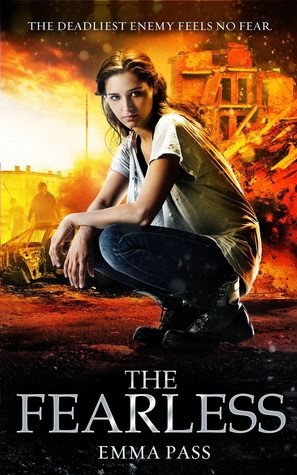 Review:
'The Fearless' by British author Emma Pass is pretty much awesome from start to finish.  I was in a bit of a reading slump until I picked up this book and it was just what I was looking for, a fast-paced story which led me on an exhilarating, terrifying and nail-biting journey.  I haven't actually read Emma Pass's first book 'Acid' yet so I wasn't sure what to expect from her writing, but I loved it.  The characters and the story concept were both brilliant and had me completely hooked.

I could definitely see the story transferring well to the big screen because everything was so well depicted and it had all the right ingredients to make anyone a fan of the series.

The plot is about a society which has been taken over by the Fearless - people who have been injected with a serum which takes away their emotions: fear, hate, love and their empathy for other human beings.  Super strong and fast, they begin to destroy everything in their path, leading to families literally fleeing for their lives.  The main character Cass lives on the island of Hope, where she and her younger brother Jori seek shelter from the horrors of the world.  With her mother and father dead she is determined to protect Jori no matter the cost.

Packed full of suspense, the story hurtles along, hardly giving you time to breathe as Cass finds herself in some desperate and dangerous situations.  I really, really enjoyed it and found myself unable to put it down. I was gripped by the adventure that unfolded but also liked the touches of romance and the strong bond between siblings that came across so well.  It's nice to come across a British author who can more than hold her own with some of the most popular YA series in bookshops at the moment.

I'm extremely impatient to find out what lies in store next for Cass as the ending of the book signals more action still to come (I hope this isn't a standalone).  I will definitely be along for the ride!