Review: A Kiss in the Dark - Cat Clarke

A Kiss in the Dark by Cat Clarke, published by Quercus on 3rd April 2014

Goodreads synopsis:
When Alex meets Kate the attraction is instant.

Alex is funny, good-looking, and a little shy – everything that Kate wants in a boyfriend.

Alex can’t help falling for Kate, who is pretty, charming and maybe just a little naive…

But one of them is hiding a secret, and as their love blossoms, it threatens to ruin not just their relationship, but their lives. 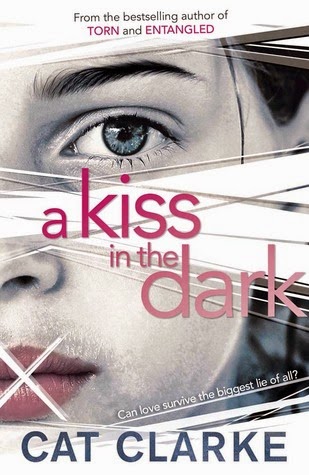 Review:
One of the things I like about Cat Clarke books is that they always make me question my own opinions.  I may not always feel comfortable with some of the scenarios and situations she puts her characters in but I think that's a good thing because Clarke often shows that things are not always as clear cut as they may first appear to be and this makes you think twice about your own feelings and standpoint.

'A Kiss in the Dark' throws up a lot of questions about identity which will resonate with teen readers.  At a time when a lot of young people are just starting to work out who they are and who they want to be, I think the character of Alex is one that readers will find some sympathy for.  A question mark hangs over many of the decisions that Alex makes throughout the story - were these made intentionally or unintentionally and this is something that I thought a lot about as I was reading.  I have to admit that I still wasn't entirely sure of how I felt about things by the end of the book.

Based on a real life set of events, I'm going to avoid talking about the storyline at all because there is the potential to accidentally reveal a huge spoiler.  Although this is revealed after only a few chapters, it is one that completely took me by surprise and turned everything on it's head.  I can't imagine anyone would be able to guess what happens.  This secret forms the structure of the book which is split into a before and after the reveal.

Although 'A Kiss in the Dark' isn't my favourite Cat Clarke book, I still thought it was an extremely thought-provoking read which was brilliantly written and absolutely fascinating in terms of the very different storyline.
Posted by Samantha (A Dream of Books) at 09:58