Now You See Me by Emma Haughton, published by Usborne on 1st May 2014

His family and friends are still hanging on to every last shred of hope. Not knowing if he's alive or dead, their world is shrouded in shadows, secrets and suspicions.

This is the story of what happens when hope comes back to haunt you. When your desperation is used against you. When you search for the truth – but are too scared to accept the reality staring you in the face... 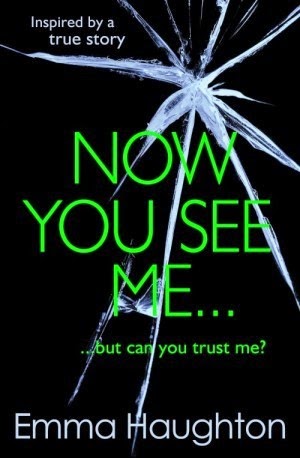 Review:
'Now You See Me' is a psychological thriller by British author Emma Haughton.  This is her first novel for young-adults which is inspired by a true story.  I was actually already familiar with the real events behind the book which slightly spoiled things for me because I knew what one of the big plot twists was going to be.  This meant that I didn't find the story quite as suspenseful as it might have been but readers who approach the novel with no prior insight would probably find it quite gripping.

The story is narrated from the point of view of Hannah, whose best-friend Danny went missing three years ago.  No one has seen him since then and the police investigation failed to uncover the truth behind his disappearance.  Hannah has always wondered if she could have done something to stop him from vanishing but she's over the moon when he eventually turns up after so many years.  The only problem is that Danny can't remember anything about his missing years and seems somehow different to the person who used to be her closest friend.

The majority of the story is about what really happened to Danny, as well as focusing on Hannah and Danny's families and the impact of his reappearance on everyone involved.  I found it interesting to see the impact on each individual but I think I would have enjoyed it more if I hadn't already guessed the main twist.  There was another surprise thrown in near the end of the book and I thought that was an intriguing and well chosen change of direction.

It's nice to read a British YA book but I wasn't completely hooked by this title as I would have expected to be from the blurb.  That said, I think a lot of readers will enjoy 'Now You See Me;, particularly if you're a fan of this type of genre.