Today I'm taking part in the blog tour for 'Oksa Pollock: The Heart of Two Worlds' by Anne Plichota and Cendrine Wolf.  Without further ado, I'm going to hand over to Sue Rose, the translator of the Oksa Pollock series. 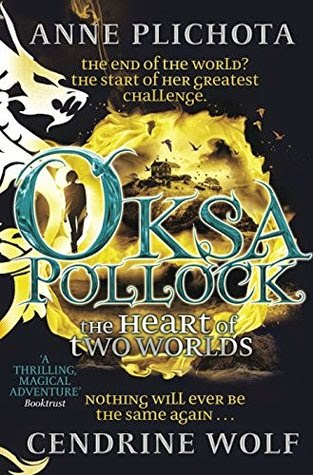 Translating is fun! When you get it right, it’s as satisfying as completing a crossword puzzle or a Sudoku. It’s not easy, though. You have to work very hard at getting all the right words in the right places – translating literally, which is when you substitute each word in French for a word in English as it appears on the page, is not an option.
What I particularly loved about translating the Oksa Pollock books was the huge number of fun names for creatures, spells and powers, which often worked as puns or wordplays in French. I had to find translations that worked in the same way in English as they did in French – which meant often doing something new, so that I was translating the idea behind the words and not the words themselves. Your mission as a translator, should you wish to accept it, is to move so stealthily that you become invisible, like a Ninja warrior. If you’re seen, you’ve failed.
This great Translator’s pack will give you some idea of what it means to be a translator and some of the difficulties that we face. Good luck, Ninja masters – over to you!
Oksa Pollock translation pack