What I'll be reading during the Christmas holiday

Life has been so busy lately that reading seems to have slipped a bit over the last month.  I'm really looking forward to having a two week Christmas break and getting stuck into some of the lovely January releases that I've been sent.  There are some crackers here which I'm very excited about! 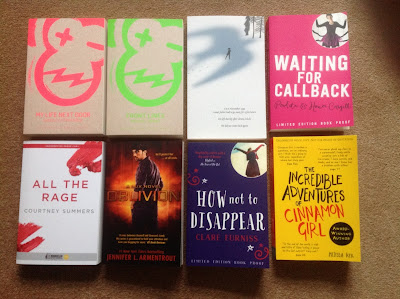 Front Lines by Michael Grant (published by Electric Monkey on 28th January)
A new Michael Grant book is always a reason to celebrate.  I love the plot of 'Front Lines' which reimagines World War II with females fighting alongside men on the front line.

Anna and the Swallow Man by Gaviel Savit (published by Bodley Head on 28th January)
Another World War II novel, this has been described as in the same vein as 'The Book Thief'.  It's also a debut novel which I think is going to be a little gem of a book.

Waiting for Callback by Perdita and Honor Cargill (published by Simon and Schuster on 28th January)
Written by a mother and daughter team, this one sounds incredibly funny.  I think there are going to be lots of giggles in store for readers.

All the Rage by Courtney Summers (published by Macmillan Children's Books on 28th January)
I'm expecting this to be a powerful and deeply moving read.  I also think it will also throw up lots of challenging questions.

Oblivion by Jennifer L. Armentrout (published by Hodder on 3rd December)
This is going to be top of my Christmas reading list.  A new novel about Daemon and Katy but from the point of view of Daemon.  I seriously can't wait to get started on this one!  Plus just look at that cover - gorgeous!

How Not to Disappear by Clare Furniss (published by Simon and Schuster on 31st December)
'The Year of the Rat' was so good that this title has a lot to live up to.  I'm expecting this one to make me cry buckets.

The Incredible Adventures of Cinnamon Girl by Melissa Keil (published by Stripes on 11th February)
Aussie YA!  The reviews I've read of this book have been positively glowing so I'm sure this will be a brilliant read.
Posted by Samantha (A Dream of Books) at 00:00