Goodreads synopsis:
In the small town of Sand, populated by gunslingers and surrounded by endless desert, Imma washes dishes and grieves for a life she never had. She and her brother, Nikko, dreamed of escaping to become bullet catchers, a legendary band of outlaws who can deflect bullets with their hands. But they were wiped out years ago, Nikko with them. And leaving is impossible when walking into the desert means certain death.

When she sees a stranger catch a man's bullet and turn it back on him, Imma knows it can only mean one thing: the bullet catchers live on, and this is her way out. Determined to follow him, Imma starts a journey that will take her to her physical extremes and force her to question just what family means and who she really is: bullet catcher or gunslinger; hero or monster. 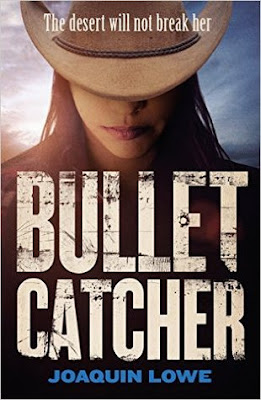 Review:
'Bullet Catcher' was a brilliant read, based around a unique plot which was totally different to most of the other Young Adult books around at the moment.  Very refreshing.  It was gritty and exciting, placing the characters in life and death situations where there was no easy way out.  As I was reading it, I couldn't help but think that it would make a fantastic book-to-film adaptation.  A western for teens with a strong female heroine.

The story unfolds with the main character Imma, longing to escape her pitiful existence in the small town of Sand.  When she sees a chance for a different future for herself, she grabs it and follows a mysterious bullet catcher out of town and across the desert.  Her fate inexplicably linked to his, she has no idea that difficult choices await her as she starts out on a journey that she can't turn back from.

I loved the idea of bullet catchers - people who can catch bullets and turn them back on those who fired them.  How cool is that?!  The concept is so original and different.  Imma has to choose between this life and that as a gunslinger.  It's great that these roles are not barred from females, who can equally do everything that a man can do.

Joaquin Lowe has ensured that the reader stays gripped from start to finish.  Family ties are forged and broken, alliances are made and forgotten as everything is put on the line in the fight for survival. This was a fantastic read which I would definitely recommend to male and female readers alike. I haven't heard anything about a sequel but the story was left open-ended, so I'm going to keep my fingers crossed that there will be another book in the series very soon.