Review: What I Thought Was True - Huntley Fitzpatrick

What I Thought Was True by Huntley Fitzpatrick, published by Electric Monkey on 7th April 2016

Goodreads synopsis:
Gwen Castle has never so badly wanted to say good-bye to her island home till now: the summer her Biggest Mistake Ever, Cassidy Somers, takes a job there as the local yard boy. He's a rich kid from across the bridge in Stony Bay, and she hails from a family of fishermen and housecleaners who keep the island's summer people happy. Gwen worries a life of cleaning houses will be her fate too, but just when it looks like she'll never escape her past—or the island—Gwen's dad gives her some shocking advice. Sparks fly and secret histories unspool as Gwen spends a gorgeous, restless summer struggling to resolve what she thought was true—about the place she lives, the people she loves, and even herself—with what really is. 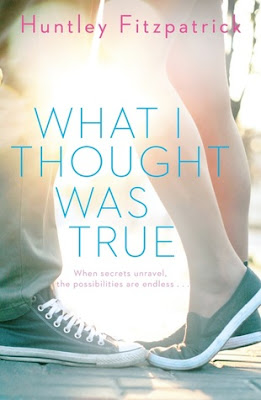 Review:
This is the second book I've read by Huntley Fitzpatrick.  I was expecting something in the same vein as 'Open Road Summer' but I found that this story was quite different.  Rather than being the easy breezy summery read that I was expecting, it turned out to be something altogether more serious, dealing with complex issues involving families and friends.

The story is set on Seashell Island - a picture perfect place where the main character Gwen Castle lives with her family.  Gwen is trying to forget her 'big mistake', when he turns out to be the new yard boy for the summer on the island.  Suddenly Cass is everywhere and impossible for Gwen to avoid any longer.  From the start of the book, it is made obvious that something happened between the two characters which they have not been able to properly move past.  I guessed what it might be but I think the truth should have been dealt with sooner, rather than being strung out until nearly the end.  The revelation wasn't as big or as shocking as I was expecting it to be, even though it did seem out of character for Gwen.

Gwen and Cass are both quite mixed-up, stumbling over mistakes they have made and uncertain of how the other person really feels.  I thought that they were interesting characters but I didn't feel any great warmth towards either of them.  I actually found the relationship between Gwen's cousin Nic and her best friend Viv much more intriguing, as they try and face up to the decisions they have to make about their future and how these will affect them as a couple.  Everyone is adjusting to what awaits them around the next corner and facing great uncertainty about their next steps.

I did struggle with the extremely slow pace of the story and the fact that nothing really substantial actually happens until very near the end.  At that point, I have to be honest and say that I had almost lost focus by then on what was actually going on.  I was disappointed that I didn't enjoy this book more but I'll keep my fingers crossed for Huntley Fitzpatrick's next one.
Posted by Samantha (A Dream of Books) at 00:00