Genuine Fraud by E. Lockhart, published by Hot Key Books on 31st May 2018

Goodreads synopsis:
Imogen is a runaway heiress, an orphan, a cook, and a cheat.
Jule is a fighter, a social chameleon, and an athlete.
An intense friendship. A disappearance. A murder, or maybe two.
A bad romance, or maybe three.
Blunt objects, disguises, blood, and chocolate. The American dream, superheroes, spies, and villains.
A girl who refuses to give people what they want from her.
A girl who refuses to be the person she once was. 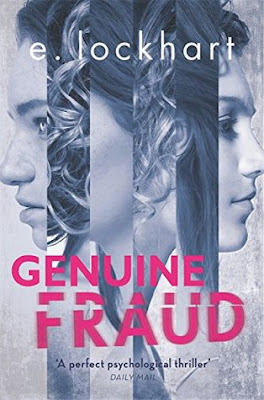 Review:
Deceptive and deliciously dark and twisty, this is a fiendishly good YA psychological thriller.

The story focuses on two friends - Julie and Imogen.  Imogen is an adopted child and an heiress. She's gifted with everything she could ever want. Used to having everyone fall at her feet and fawn over her, she has never had to struggle for anything. Julie is her opposite. She's had to become tough. She's survived on her own and is a fighter but after so long trying to become something more, she finally sees another way forward.

The timeline for this book is so clever. It skips around a lot between 2016 and 2017 and the story almost unfolds backwards. My advice to you is don't trust everything you read because appearances can be deceptive and E. Lockhart has thrown in so many brilliant twists that you are constantly kept on your toes. The locations change too, with the story moving from Mexico, to New York, to San Francisco. It's important to try to keep track of the place and time because this helps when all the puzzle pieces begin to fall into place.

This was a blisteringly good read. I definitely loved it more than 'We Were Liars' and I've been recommending it to everyone ever since. I'm almost jealous of anyone getting to read this for the first time because it's so clever and unique that reading it is such an immensely enjoyable experience.