Shadow of the Fox by Julie Kagawa, published by HarperCollins on 1st November 2018

Goodreads synopsis:
A single wish will spark a new dawn. Every millennium, one age ends and another age dawns...and whoever holds the Scroll of a Thousand Prayers holds the power to call the great Kami Dragon from the sea and ask for any one wish. The time is near and the missing pieces of the scroll will be sought throughout the land of Iwagoto. The holder of the first piece is a humble, unknown peasant girl with a dangerous secret. Demons have burned the temple Yumeko was raised in to the ground, killing everyone within, including the master who trained her to both use and hide her kitsune powers. Yumeko escapes with the temple's greatest treasure - one part of the ancient scroll. Fate thrusts her into the path of a mysterious samurai, Kage Tatsumi of the Shadow Clan. Yumeko knows he seeks what she has and is under orders to kill anything and anyone who stands between him and the scroll. 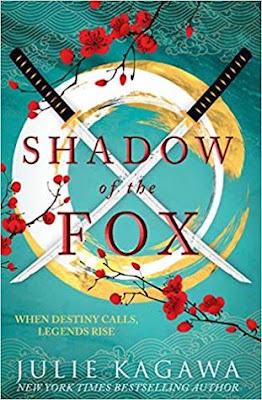 Review:
Julie Kagawa is one of my favourite YA authors of paranormal/fantasy. She's someone whose books I always look forward to reading and she's a familiar name on my auto-buy list. Although I find her a phenomenal writer, just occasionally I've been a bit love/hate with her. I absolutely adored the Talon and Blood of Eden series but I wasn't such a fan of the Iron Fey books, which is a shame because I know a lot of people love them. I was unbelievably excited about reading 'Shadow of the Fox' but I could tell after the first few chapters that this wasn't going to be a hit with me. It's hard to put my finger on exactly why but I think I found the Japanese mythology too overwhelming and complicated. The world building was so hard to follow that it meant I lost my connection to the characters and their destinies. I had to keep going back to read parts again because I couldn't always work out what was happening or how everything linked together. For instance, the first chapter threw me completely because it didn't seem to have any relation to the story that followed. I found it bewildering and an odd opening to the story, although later on in the book, it did admittedly slot into place.

The characters are extremely unusual. Yumeko is a kitsue - part human and part fox. Kage Tatsumi is a samurai, deadly and dangerous. The two are brought together when their paths cross, involving the Scroll of a Thousand Prayers - an ancient artefact which is being hunted by many of the people in the book. The big problem I had was that I didn't particularly care for either Yumeko or Tatsumi. Yumeko was intriguing in the beginning but then she became a bit one-dimensional and was far too quick to fall under the spell of Tatsumi, rather than standing on her own two feet. I wanted to see her be more independent and develop over the course of the novel, which just didn't happen.

The pace of the novel was very slow and I found the plot oddly disjointed. I ended up putting the book down for several days, before starting it again, which isn't normally my style of reading. If I'm enjoying a book then I like to devour it in one sitting. I'm afraid 'Shadow of the Fox' just didn't excite me or keep me hooked in the way that some of Julie Kagawa's other series have. I desperately wanted to love it but found little to entice me into wanting to continue with the rest of the series.

Check out the rest of the blog tour stops for 'Shadow of the Fox'. 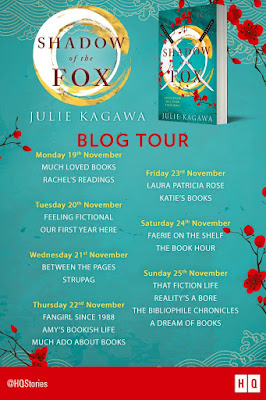