Goodreads synopsis:
Tom and Augusta are from different places and different times, but they meet in the virtual world to combine forces in battle, to save a kingdom, escape a web of deceit and to find love. In a place where fictions can be truths and truths fictions, learning who to trust is more than friendship, it is about about survival. 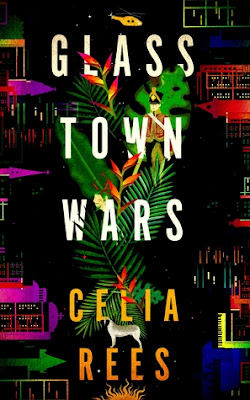 Review:
'Glass Town Wars' is Celia Rees first YA novel for over 6 years. She returns with an imaginative and inventive tale which is inspired by the early writings of the Bronte siblings.

The plot focuses on a boy called Tom who is in hospital in a coma. Cut off from the real world, Tom's friend Milo makes him a test guinea pig for a new virtual reality gaming device that draws him into a dizzying world, far from the one he lives in. Tom meets Augusta who is fighting to save her kingdom and becomes part of the on-going battle. The story switches between this world and that of London in the present time, where his family and friends are desperately trying to bring him back, meshing together imagination and reality.

I enjoyed parts of this book but I found other bits confusing and I wasn't entirely sure I understood everything that happened or the meaning behind certain events in the story. It was incredibly unique and had such an interesting concept but some of it didn't make any sense to me. It's definitely an ingenious idea to take the fictitious world written about by Emily Bronte and co and bring it alive on the page. Rees embellishes it with her own flourishes and gives it a beating heart which draws the reader in. However, although I find the Bronte juvenilia fascinating, I'm not entirely sure the novel as a whole worked.

At times it was very slow and it also took me quite a while to get into the story. I kept having to go back to read sections again and even then I felt like I was missing something that would have helped everything click into place. I actually enjoyed more, the parts of the book that were set in the hospital, rather than in the virtual world, where Tom is being read 'Wuthering Heights' by another character called Lucy, who is trying to bring him out of his coma.

The book itself felt very experimental and although I wanted to love it because it combines Celia Rees and the Brontes, it ended up falling short of my expectations.
Posted by Samantha (A Dream of Books) at 07:31