The Record Keeper by Agnes Gomillion, published by Titan Books on 18th June 2019

Synopsis:
After World War III, Earth is in ruins, and the final armies have come to a reluctant truce. Everyone must obey the law--in every way--or risk shattering the fragile peace and endangering the entire human race.

Although Arika Cobane is a member of the race whose backbreaking labor provides food for the remnants of humanity, she is destined to become a member of the Kongo elite. After ten gruelling years of training, she is on the threshold of taking her place of privilege far from the fields. But everything changes when a new student arrives. Hosea Khan spews dangerous words of treason: What does peace matter if innocent lives are lost to maintain it?

As Arika is exposed to new beliefs, she realizes that the laws she has dedicated herself to uphold are the root of her people's misery. If Arika is to liberate her people, she must unearth her fierce heart and discover the true meaning of freedom: finding the courage to live--or die--without fear. 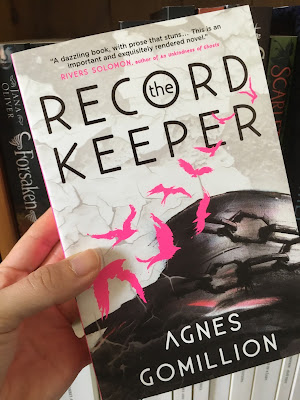 Review:
'The Record Keeper' is Agnes Gomillion's debut novel. It is described as a 'fresh new take on the afro-futuristic science-fiction genre', which made me curious about the book but also wonder whether it was going to appeal to my tastes. I haven't read a lot of science-fiction and it's not normally a genre that I choose.

The story is set in 170 AE (After the End). Earth has been left in tatters after World War III and a fragile peace has been met. The main character Arika, is taken from a community nursery when she is very young. She is destined to become a member of the Kongo elite but before then she has to survive the years of training that lay ahead of her under the watchful and sometimes brutal eye of Teacher Jones. Arika becomes an exemplary student, always ready with the correct answer in class but never quite forgetting her earlier rebellion when she was seven and tried to rally her fellow comrades. Her carefully constructed existence and beliefs come under threat when a new pupil arrives at the school and cracks start to form. Arika is no longer sure if she can follow the path set out for her as Hosea opens her eyes to the truth about the society they now live in.

One of the book's main themes is racism. The white English ruling class have the dominant place in society and the Kongos' job is to work the fields and provide food for them. The balance of power is uneven and black people are suppressed by the ruling class. They are made to go through a Rebirth, where they have to take a pill that reprograms their memories and makes them forget their pasts. This is simply a tool that is used to control them and ensure they stay in their place. Everyone in the story has to fulfil their role and obey the law or they threaten the peace of society.

This was an interesting and unique read but I did struggle to fully engage with the story and the characters. I think a large part of that is down to the fact that there was nothing familiar that I could grasp onto and I found the world building a bit lacking. I couldn't quite find my feet in the new world that Gomillion had created and this meant that I often couldn't follow all the nuances of the plot. I think that is probably down to the fact that science fiction isn't my favourite genre, so if you do like SF then that won't be a problem for you. Arika was an extremely strong protagonist and her courage and determination were definitely qualities that I admired. Her journey is not easy but she is tough and fierce and gradually becomes a new voice to be listened to in a world where people have long been quietened.
Posted by Samantha (A Dream of Books) at 00:00