I'm delighted to be taking part in the blog tour today for Maresi Red Mantle by Maria Turtschaninoff, which is the final instalment in the Red Abbey Chronicles. I have a wonderful guest post from Maria about writing a trilogy. 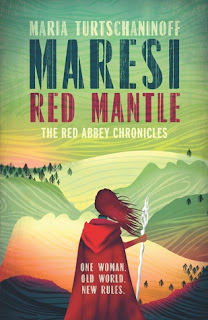 I have written a trilogy that is very un-trilogyesque in style and execution. MARESI is written from the perspective of a young girl chronicling one spring in her life at an all-female Abbey. NAONDEL, the second novel, is actually a prequel set hundreds of years before the events in MARESI and written from the perspective of several first-person narrators. They all tell their own stories of how they came to be in an evil man’s harem, and about their eventual escape. The tone and intent in each story is different. MARESI RED MANTLE is written in epistolary form, as Maresi writes letters back to the Abbey after returning home to the province of Rovas and her tiny native village. There are no answers from the Abbey in the book. The text Maresi wrote in the first novel was intended for the Abbey archives and was written by her with that in mind, so the tone is somewhat different to the one she uses in the last novel, when she writes letters to her friends and teachers. In the letters, too, the tone varies: she writes of different things and in different ways when she’s writing to Sister O, her teacher and guardian of the Crone’s secrets, and when she’s writing to her friend Jai or her friend Ennike, now the servant of the Maiden and keeper of knowledge about the female body and love. We get to see new sides of Maresi, as she shows her fears and insecurities to some recipients and not to others. How does she wish to present herself? What worries her, what occupies her mind? During the course of the correspondence Maresi grows and changes quite a lot, while in the first novel she’s the same throughout, as it’s written looking back at a major event that took place.

So, in short, to me there has been very little of the trilogy in the writing of the Red Abbey Chronicles. I have not had one continuous story, written in the same manner and style. I think I am fairly incapable of doing so: my mind would get bored. I need to challenge myself with something new every time. Of course, this has led to a lot of cursing and hair-pulling during the writing process! I have complained often and loudly to my husband about why I must make it so difficult for myself. Why can’t I just find one way to tell a story and stick with it?

But there we have it: I can’t. And the result is this: a trilogy that has very little of the trilogy to it, with a prequel in the middle and a different style every time.

Are the Red Abbey Chronicles now ended? It’s hard for me to say. I have written two books previously, set in the same universe as the Red Abbey Chronicles, ARRA and ANACHÉ. They have not been published in English yet, unfortunately. But to me all five books are part of the same weave, a tapestry that I knit of this imaginary world of mine, book by book. And I am by no means done with the world. For each book I’ve written there are threads left untied, characters whose stories I would love to dive into and learn more about. Will they all be tied to the Red Abbey? Probably not. But the longer I write in this world the more the stories become intertwined. In MARESI RED MANTLE there are references to both the novels ARRA and ANACHÉ, and I foresee more of this kind of intermingling in the future.