The Hunting Party by Lucy Foley, published by HarperCollins on 24th January 2019

Synopsis:
During the languid days of the Christmas break, a group of thirtysomething friends from Oxford meet to welcome in the New Year together, a tradition they began as students ten years ago. For this vacation, they’ve chosen an idyllic and isolated estate in the Scottish Highlands—the perfect place to get away and unwind by themselves.

They arrive on December 30th, just before a historic blizzard seals the lodge off from the outside world. Two days later, on New Year’s Day, one of them is dead.

The trip began innocently enough: admiring the stunning if foreboding scenery, champagne in front of a crackling fire, and reminiscences about the past. But after a decade, the weight of secret resentments has grown too heavy for the group’s tenuous nostalgia to bear. Amid the boisterous revelry of New Year’s Eve, the cord holding them together snaps.

Keep your friends close, the old adage goes. But just how close is too close? 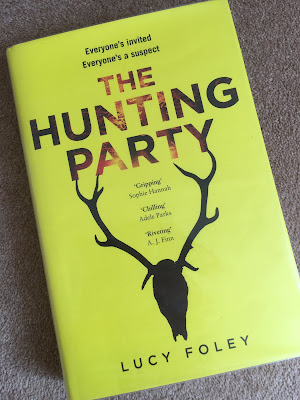 Review:
I wanted to read 'The Hunting Party' after I heard it described as 'like Agatha Christie on acid'. Since I'm knee-deep in the middle of a huge binge on Christie's books, I decided that I absolutely had to read Lucy Foley's debut crime novel.

The story is set around New Year's Eve, when a group of old school friends gather in the Scottish Highlands at the remote Loch Corrin Estate. They've known each other for 10 years and always gather once a year on a celebratory getaway trip. The location is remote, they are practically the only guests there and with the snow falling heavily, they have no way out. The celebrations seem to be in full swing until a body is found in midst of a thick blizzard and all signs point to the fact that this was not an accidental death. There is a murderer among them.

The narrative switches between various characters in the book, giving differing perspectives on events. There's the glamorous Miranda, who always seems to get everything she wants and who loves making a project of those who are less fortunate than her. Then there's Emma, who is a slightly less polished version of Miranda, hasn't always been a part of the group but who this year, has planned the whole trip. And finally, Katie, who was one of my favourites. She is the quiet one, the odd one out among all of the other couples and the person who came across as having changed the most since their school days at Oxford. In addition, the narrative is also shared between Heather, who manages the Estate and the gamekeeper Doug. Everyone seems to have their own secret and it was interesting trying to work out what they were all hiding.

I thought it was a stroke of genius, not to reveal immediately who the dead guest was. I made my own guess (which turned out to be right) but I enjoyed the not knowing at the start. I also loved trying to work out who the murderer could be and why. It kept me absolutely gripped and even when I briefly put the book down, I was still thinking about the story and trying to puzzle the mystery out.

The setting was brilliant and reminded me exactly of an Agatha Christie novel. The remote setting seems at first to be a wonderful spot for a getaway but eventually the silence and claustrophobia surrounding the place, begins to expose all the cracks in the relationships between the old friends. There is no where for them to escape each other and being in close confinement means old wounds being opened, secrets being brought to light and their true feelings about one another finally being exposed. I could easily picture the snowy wilderness and feel the chilling atmosphere, as the sense of fear begins to surround them.

This was exactly my kind of book. Lucy Foley keeps the tension and suspense high throughout the story, proceeding to turn it up a notch when the murderer starts to get desperate and things begin to spin out of control. The storytelling was fast-paced and I was gripped by intrigue from the very first page. I loved this book so much and I hope that Foley will stick to this winning recipe in the future. If she does, I'll be first in line to get my hands on her next offering.

Also, I'm thrilled to discover that the TV rights to the novel have been sold, so we should see 'The Hunting Party' in the future, on the small screen. Great news!