Review: The Weight of a Thousand Feathers - Brian Conaghan

The Weight of a Thousand Feathers by Brian Conaghan, published by Bloomsbury Children's Books on 13th June 2019 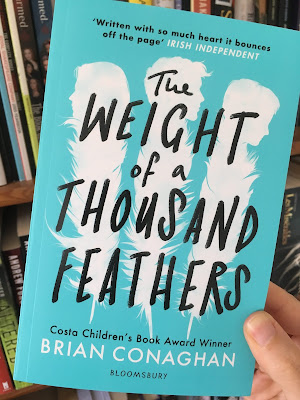 Review:
'The Weight of a Thousand Feathers' is Brian Conaghan's fourth novel and winner of the 2018 Irish book award for Teen and YA Book of the Year. It's the story of teenager Bobby Seed, who is your average 16 year old, apart from the fact that he is a carer to his Mum and also looks after his younger brother Danny. Bobby's mother has MS and is dependant on him for her care. He has to cook, clean and basically do everything for her.

I haven't read any YA books before that are told from the point of view of a family caregiver and especially not one who also happens to be just a teenager. As well as caring for his Mum, Bobby is also trying to navigate his own issues at school, shield his younger brother and deal with relationship dramas and questions about his own sexuality. Bobby was an extremely strong voice in the story who ends up confronted with an impossible dilemma. His train of thought is full of indecision, guilt and angst and I really felt for him.

During the story, Bobby meets Lou at a young carers support group. He is attracted to him and they share their emotions and thoughts with each other but I wasn't actually very keen on Lou. I found it hard to feel the same sympathy toward him as I felt for Bobby.

The book explores the ethical dilemma of assisted suicide or euthanasia which makes it an incredibly hard-hitting read. It is such a complex and difficult question: would you help ease the suffering of a loved one if they were dying or in pair or with no quality of life? It is an extremely controversial and emotive issue and one which creates a lot of debate. I thought that Brian Conaghan presented the situation with care and a sensitive touch. I found it so heart-breaking and extremely difficult to read at times. My heart went out to Bobby and his brother.

This is a story that is both thought-provoking, as well as incredibly sad and moving. Be prepared to read with a big box of tissues by your side.