Blog Tour: Review: I Give It a Year by Helen Whitaker

Today I'm hosting a stop on the blog tour for 'I Give It A Year' by Helen Whitaker. Thanks to Alex at Orion for asking me to take part.

Synopsis:
Her husband's moved out - and her dad's moved in...

It's New Year's Eve, and Iris has just found out that her husband, Adam, is cheating on her. Furious, she kicks him out, and enlists her Dad to move in and help with the children whilst she tries to mend her broken heart.

But her Dad soon starts to display signs of Alzheimer's, and Iris realises that if she loses her partner, she'll be managing an awful lot on her own. Soon, she realises that Adam wasn't the only one taking their marriage for granted, and for the sake of the children she decides to give him one more chance.

But is it braver to stay than to run? And can anyone fall in love with the same person twice? 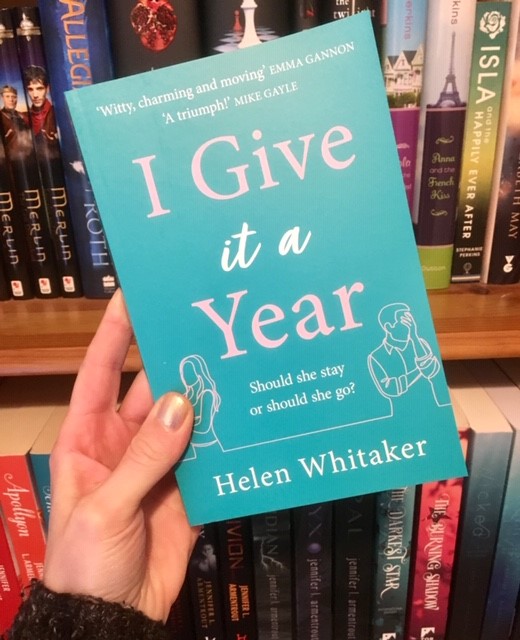 Review:
This is the first book I've read by Helen Whitaker so I was looking forward to trying a title by an author who is new to me. 'I Give It A Year' begins with Iris discovering that her husband has been having an affair. The story chronicles the year that follows as Iris and her husband Adam explore what went wrong and whether they can save their marriage after his infidelity.
What I found really interesting about the book is the way in which the author shows that there is more than one side to the story. It is not as clear cut as it might first seem and my sympathies were definitely divided between the two main characters. Iris decides that they will have a year to try to work things out and so they start couples counselling. This isn't something that I've come across very often in stories that I've read so I thought it was a fascinating way of digging beneath the surface of a marriage, to explore some of the reasons why it may have begun to break down. Whitaker writes with honesty and sensitivity and this section of the book was very well handled.
As well as the focus on the marriage, the author also explores the difficulties and struggles of dealing with a parent with ongoing signs of Alzheimer's. This has an impact on the whole family and at times, I found this quite hard to read about but it's something that affects a huge number of people so I like the fact that the author was brave enough to tackle the topic.
'I Give It A Year' was an original and honest novel which I very much enjoyed. The characters were brilliantly portrayed and I the story was truthful and emotional. I will definitely be looking out for more books by Helen Whitaker in the future.
Don't forget to check out all of the other stops on the 'I Give It a Year' blog tour. 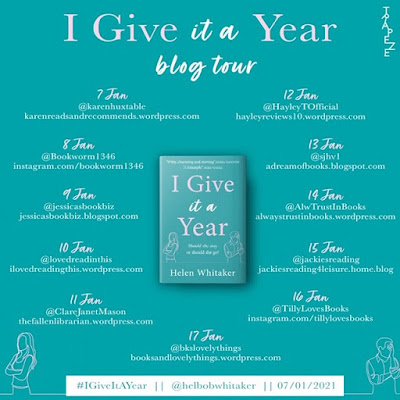