Today I'm taking part in the blog tour for 'Marion Lane and the Midnight Murder' by T.A Willberg. Thank you to Trapeze Books for inviting me to take part. 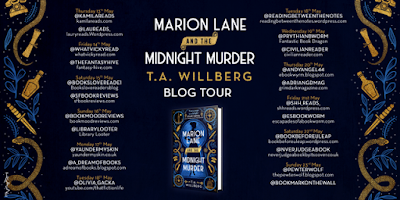 Synopsis:
Elaborately disguised and hidden deep beneath the city's streets lies the world of Miss Brickett's, a secret detective agency, training and housing the mysterious Inquirers. From traversing deceptive escape rooms full of baited traps and hidden dangers, to engineering almost magical mechanical gadgets, apprentice detectives at Miss Brickett's undergo rigorous training to equip them with the skills and knowledge they will need to solve the mysteries that confound London's police force.

But nothing can prepare 23-year-old apprentice Marion Lane for what happens after the arrest of her friend and mentor Frank on suspicion of murder: he has tasks Marion with clearing his name and saving his life. Her investigation will place Marion and her friends in great peril as they venture into the forbidden maze of uncharted tunnels that surround Miss Brickett's.

Being discovered out of bounds means immediate dismissal, but that is the least of Marion's problems when she discovered that the tunnels contain more than just secrets... 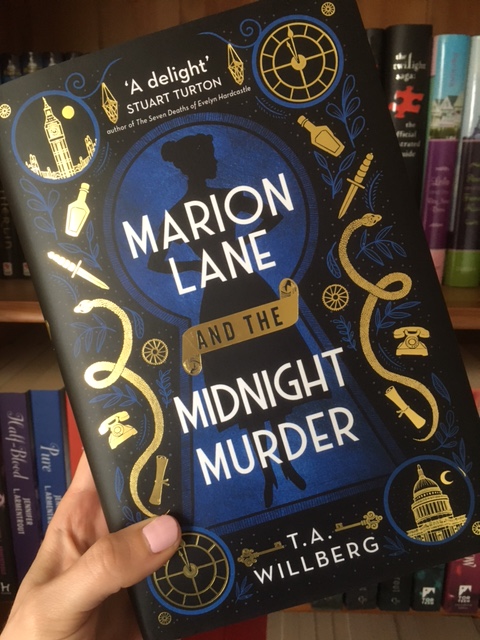 Review:
A historical mystery set in the secret underground headquarters of a detective agency, featuring hidden tunnels and steampunk gadgets - I think I fell in love with 'Marion Lane and the Midnight Murder' before I even started reading it.
I loved the plot concept, the beautiful shiny blue and gold cover, the intriguing map inside and the setting for the book. The story takes place deep beneath the streets of London, concealed from the prying eyes of the public. Set in the 1950's there is a wonderful contrast between this period and the incredible, futuristic gadgets that the agency uses in their cases.
This was a hugely fun and enjoyable read which took me a on a real adventure. Part of the strength of the book lies with its main character, Marion Lane. She's endearing, intrepid, clever and dogged in her pursuit of the truth. She wants to clear the name of her friend and mentor after he is accused of a terrible crime and she won't allow anything to get in her way of investigating on her own. I'm a big fan of locked room mysteries and this had elements of that, with the realisation that the culprit could only only be one of the other agency staff. Marion has a knack for fixing anything mechanical and has learnt to stand on her own two feet due to her difficult family circumstances. I adored her friendship with Bill, a fellow apprentice, and I thought they made a great double act.
I was intrigued and drawn in by the case that the story is centered around and found that the plot unraveled at a fast pace that kept me engaged throughout. There were plenty of surprises along the way and I think the author did a fantastic job of keeping the reader on their toes. I kept getting to the end of a chapter and then needed to read just one more and then one more after that!
This is the first in a new series that I will definitely be continuing with. It was quirky, original and fun and I can't wait to follow Marion on her next adventure. It's great news that she will be returning in 2022, to appear in 'Marion Lane and the Deadly Rose'.
Posted by Samantha (A Dream of Books) at 22:00