I was thrilled to be invited to take part in the blog tour for 'Wolfbane' by Michelle Paver. I've been reading Michelle's books since 2004 when 'Wolf Brother' the opening instalment of the series was published. I've grown up with Torak and Wolf and lived all their adventures with them, so I was both sad and excited to read the epic last book in the Chronicles of Ancient Darkness which was published by Zephyr Books on 26th April. 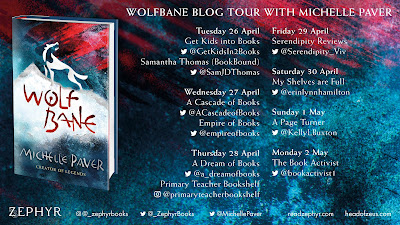 Synopsis:
It is early spring, a turbulent, perilous time of sudden storms, frozen river fractures and drifting ice. Fleeing from a demon intent on devouring his souls, Wolf is swept out to Sea far from the Forest and his pack. The ocean too teems with danger: sea wolves, sharks and hunters of the deep, and the demon is gaining ground. Torak and Renn must race to save their pack-brother, battling the harsh, icy waves and merciless torrents. If they can't find Wolf in time, the bond between them will be severed for ever...

Run wild with Wolf Brother for the last time in a Stone Age world we all want to be part of, with three-million-copy-selling author Michelle Paver, Creator of Legends. 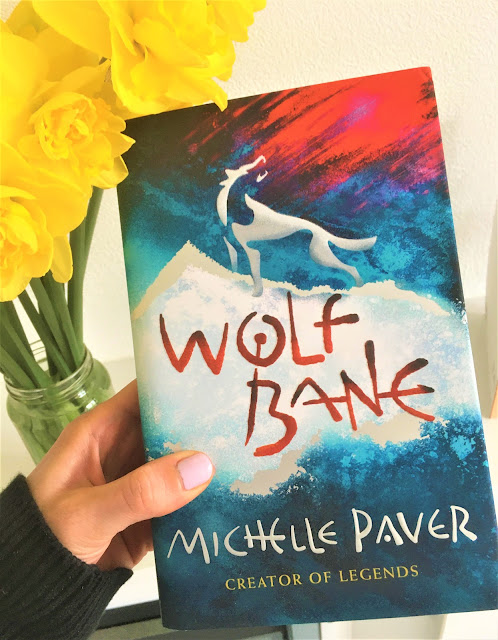 Review:
'Wolfbane' is the ninth and final book in the Chronicles of Ancient Darkness series. I can still remember reading 'Wolf Brother' for the first time so many years ago. It instantly hooked me and I've been a huge fan of Michelle Paver ever since.
In 'Wolfbane', Torak and Renn are on a desperate journey to save Wolf from an ice demon who wants to eat his souls. Torak will do anything to save him but Naiginn is a dangerous and formidable enemy. He will not be easily stopped and Torak will have to decide how much to risk in his determination to save his beloved pack brother.
This was a brilliant story, full of excitement and adventure. It was very fast-paced which made it extremely difficult to put down. There is one obstacle after another put in Torak's way and I lost count of the number of cliff-hangers at the end of the chapters. It was also great to see some of the characters who have featured briefly in earlier books and for them to get their own stories explored in more detail too. I particularly loved seeing Dark again and I was very happy with how his storyline was concluded.
Paver's conception of the unbreakable bond between the boy and Wolf is something that has always felt tangible and real. Their relationship has been the common thread running throughout the whole series and it has drawn readers in time and time again. They have grown up together and formed new families of their own but they have never stopped being there for one another and that's just so lovely and touching to see.
Michelle Paver is well known for her meticulous research and this shines through in every story she crafts. The settings are authentic, her descriptions of nature are incredible and every situation she places her characters in, is one that she has experienced herself in some way. I love the fact that she includes an author's note at the end which gives the reader a small glimpse into the research that she has carried out in the process of writing the book.
The story made me smile and cry in equal measure. I felt it was a triumphant end that fans both old and new will enjoy. Everything that I love about the books and the characters was there to see and it was a wonderful (and very emotional!) conclusion to a dearly loved series.
Although the series is finally ending, I like to think that in the hearts of fans around the world, Torak and Wolf will forever be together and running free through the forest.
Thank you to Helen Richardson and Zephyr Books for inviting me to join the blog tour and for gifting me such a beautiful and treasured signed copy of Wolfbane.