Revolution by Jennifer Donnelly, published by Bloomsbury in 2010

Goodreads synopsis:
BROOKLYN: Andi Alpers is on the edge. She’s angry at her father for leaving, angry at her mother for not being able to cope, and heartbroken by the loss of her younger brother, Truman. Rage and grief are destroying her. And she’s about to be expelled from Brooklyn Heights’ most prestigious private school when her father intervenes. Now Andi must accompany him to Paris for winter break.

PARIS: Alexandrine Paradis lived over two centuries ago. She dreamed of making her mark on the Paris stage, but a fateful encounter with a doomed prince of France cast her in a tragic role she didn’t want—and couldn’t escape.

Two girls, two centuries apart. One never knowing the other. But when Andi finds Alexandrine’s diary, she recognizes something in her words and is moved to the point of obsession. There’s comfort and distraction for Andi in the journal’s antique pages—until, on a midnight journey through the catacombs of Paris, Alexandrine’s words transcend paper and time, and the past becomes suddenly, terrifyingly present. 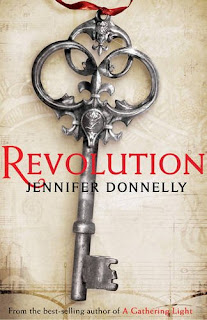 Review:
'Revolution' is Jennifer Donnelly's second young-adult novel and is an outstanding and extraordinary book.  I'd only heard good things about it before I picked this up in the library and I was so excited to get my hands on it at last!  I definitely wasn't disappointed!

The story is set both in present day Brooklyn and eigtheenth century France.  There's an incredible amount of historical detail woven into the book, which serves to evoke the sights, sounds and smells of Paris.  I felt like I was transported back in time to a period that's always fascinated me.

What's so clever about 'Revolution' is that one narrative and one story is contained within another.  First, I was absorbed by the story of Andi, an American teenager whose coping with the traumatic aftermath of her brother Truman's accidental death.  This event is ripping Andi apart as she blames herself for his death and can no longer face up to life anymore.  The only solace she finds is in her music.  When her father takes her to Paris, she discovers the diary of a young French girl, Alexandrine, who lived during the time of the French Revolution.  As Andi is sucked into Alex's story, so I was drawn into reading about Andi discovering Alex's secrets and the events of her life.  The two narratives are knit together seamlessly and just as Andi is desperate to read Alex's diary - a few more entries each night, I too was desperate to read on and on.  Trust me, once you've picked this up, you won't want to put it down.

The story delivers a real emotional punch and some of the incidents narrated in the book are so breathtakingly sad that I really felt myself sympathising with the characters.  I don't think I was quite prepared for how difficult it was going to be to read about some of the things they had to go through.

I absolutely loved the richness of detail that went into creating Alex's world.  The history of France and Marie Antoinette has always interested me and so I enjoyed finding out about her and her family.  I certainly learned a lot of things that I wasn't aware of before.

The only bit of the book that didn't work quite so well for me was sequence near the end.  I don't want to say too much about it because it will spoil it for people who haven't yet read 'Revolution', but although it worked well as a device to bring the story neatly together and wrap up all the loose ends, I'm not sure if it was entirely in keeping with the rest of the book.  I think it might have worked more effectively without it.

Regardless of that, 'Revolution' is a superb book that will whisk you back in time and  make you both smile and cry as you unravel the events of both Alex and Andi's stories.
Posted by Samantha (A Dream of Books) at 04:22