Goodreads synopsis:
Emily Vole makes headline news in the first weeks of her life, when she is found in an abandoned hatbox in Stanstead Airport. Then, only a few years later, her neighbour Mrs String dies leaving Emily a mysterious inheritance: an old shop, a small bunch of golden keys and a cat called Fidget. In the shop Emily discovers drawers full of fairy wings and the beginning of an adventure of a lifetime as the old Fairy Detective Agency comes back to life. It is up to Emily to reopen the shop, and recall the fairies to duty. Together they must embark on their first mystery to find Emily Vole's real parents and do battle with their great fairy-snatching enemy, Harpula. 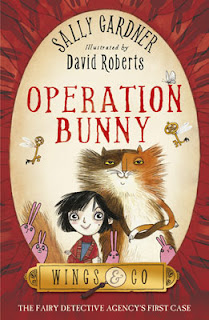 Review:
This is the first book in Sally Gardner's new series and the first case of the Fairy Detective Agency.  It's a beautifully packaged book with fabulous illustrations by David Roberts which really bring the story to life.

Combining some magical elements reminiscent of well loved fairy tales with a dark centre which will appeal hugely to readers who like it when children save the day and their wicked parents get their comeuppance, 'Operation Bunny' has been described as reminiscent of some of Roald Dahl's best loved stories.  While I think this book is actually quite different, I can understand how comparisons could be made between the two.

Sally Gardner's tale features heroine Emily Vole.  Emily has an incredible adventure when she becomes acquainted with her next door neighbour Miss String and her human-like cat Fidget.  A whole new magical world opens up for her and her life is literally turned upside down.  From then on, readers should expect just about anything to happen.  There are pink, talking bunny rabbits, fairies, witches, zombie children and magic lamps.  Suspend your disbelief because this story will carry you away from reality and into a world of enchantment and adventure.

I found this book a quirky and entertaining read.  Emily Vole is an adorable and likable heroine and this is a story spiced with secrets and magic which will appeal hugely to younger readers.
Posted by Samantha (A Dream of Books) at 00:00