League of Strays by L.B. Schulman, published by Amulet on 1st October 2012

Goodreads synopsis:
This suspenseful debut follows a group of teenage misfits in their delicious quest for revenge on those who have wronged them at their high school. When a mysterious note appears in Charlotte’s mailbox inviting her to join the League of Strays, she’s hopeful it will lead to making friends. What she discovers is a motley crew of loners and an alluring, manipulative ringleader named Kade. Kade convinces the group that they need one another both for friendship and to get back at the classmates and teachers who have betrayed them. But Kade has a bigger agenda. In addition to vandalizing their school and causing fights between other students, Kade’s real intention is a dangerous plot that will threaten lives and force Charlotte to choose between her loyalty to the League and her own conscience. 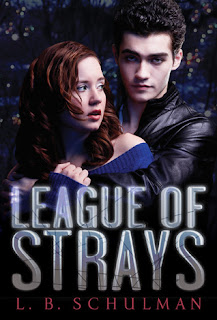 Review:
This is L.B. Schulman's debut novel about a group of teens who have all been the subject of bullying in one way or another.  This group of misfits and outcasts have been brought together by the charismatic and enigmatic Kade who wants to help them get revenge on the people who bullied them.

I have to admit that I'm not really a big fan of stories like this.  Yes, most people probably have thought about getting their own back on their bullies but the teens in 'League of Strays' definitely take it a step too far in their desire for vengeance.  Their actions are extreme and left me feeling quite uncomfortable at some points in the book.  But then maybe that was the point; to leave the reader unsettled and apprehensive about what was going to come next.

There are some interesting characters in the book, including Charlotte who narrates the story.  She's always done everything she possibly can to please her parents and works and studies hard.  In the past she has been bullied and picked on by a former friend turned enemy and it's the sense of isolation she experiences that leaves her an easy target for Kade's league of strays.  She is the moral heart and soul of the story, even though she too makes some wrong turns along the way.

I thought the story was alright but I personally felt that the ending was unsatisfactory. I don't want to say too much about it in case I give something away but I was definitely hoping for a different outcome and when it didn't happen I felt shortchanged.  Overall, this book wasn't for me because there were just one too many moments in it where I didn't agree with the actions of the characters or the outcome of the plot.
Posted by Samantha (A Dream of Books) at 00:00