Goodreads synopsis:
Aria Rose, youngest scion of one of Mystic City's two ruling rival families, finds herself betrothed to Thomas Foster, the son of her parents' sworn enemies. The union of the two will end the generations-long political feud—and unite all those living in the Aeries, the privileged upper reaches of the city, against the banished mystics who dwell below in the Depths. But Aria doesn't remember falling in love with Thomas; in fact, she wakes one day with huge gaps in her memory. And she can't conceive why her parents would have agreed to unite with the Fosters in the first place. Only when Aria meets Hunter, a gorgeous rebel mystic from the Depths, does she start to have glimmers of recollection—and to understand that he holds the key to unlocking her past. The choices she makes can save or doom the city—including herself. 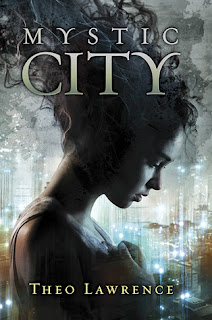 Review:
I was initially attracted to this book because it was described as a cross between Romeo and Juliet and the X-Men with a twist.  The twist being that it is set in Manhattan, but a Manhattan unlike anything you've ever seen before.  The Rose family rules over the population with an iron fist but rebel mystics lie in wait beneath the city, preparing to seize power.  An alliance is being formed between two influential families thanks to the future marriage of Aria Rose to Thomas Foster, the only problem being that Aria has had an accident and can no longer remember who Thomas is and why she ever loved him.

When this book arrived I couldn't wait to pick it up but when I started reading I thought that it was a little slow to get going and I wasn't sure if I was going to like it judging from some of the unusual language and turns of phrase used.  However, I needed have worried because as soon as the main character Aria met rebel mystic Hunter, I was absolutely hooked.  From then on I raced through the story and found it impossible to put down.

The relationship between Aria and Hunter was definitely one of my favourite things about the book.  All the scenes between the two of them were so sweet and adorable.  I loved the way he was so protective of her and the fact that everything he does is designed to keep her safe.  As the story progresses she begins to learn more about him, as does the reader and everything I discovered only made him more appealing.  Just like Romeo and Juliet some of their meetings take place outside of her bedroom window where there are plenty of opportunities to whisper sweet nothings to each other!

I enjoyed the fact that the author has woven into the story elements of one of my favourite plays of all time.  There's the warring families who are supposedly to be reunited by true love, the starcrossed lovers, the hero and his best friend and the go-between servant who tries to being the young lovers together.  It is ingenious and clever and the story was extremely engaging.  It just kept getting better and better as I read on.

I was also impressed that although the book is written by a male author, he has managed to capture brilliantly the female voice of the main character, Aria.  I couldn't wait to see how she was going to unravel the truth about what had happened to her and when she did, I was intrigued to see which direction she would decide to take next.

Mystical, magical, adventurous and romantic, I loved it!  I will definitely be adding this book to my keeper shelf and I'm itching to get my hands on the sequel 'Renegrade Heart' which is set for a summer 2013 release date.
Posted by Samantha (A Dream of Books) at 00:00