Unspoken by Sarah Rees Brennan, published by Simon and Schuster on 13th September 2012

Goodreads synopsis:
Kami Glass is in love with someone she's never met - a boy the rest of the world is convinced is imaginary. This has made her an outsider in the sleepy English town of Sorry-in-the-Vale, but she doesn't complain. She runs the school newspaper and keeps to herself for the most part - until disturbing events begin to happen.

There has been screaming in the woods and the dark, abandoned manor on the hill overlooking the town has lit up for the first time in 10 years. The Lynburn family, who ruled the town a generation ago and who all left without warning, have returned. As Kami starts to investigate for the paper, she finds out that the town she has loved all her life is hiding a multitude of secrets- and a murderer- and the key to it all just might be the boy in her head. The boy who everyone thought was imaginary may be real...and he may be dangerous. 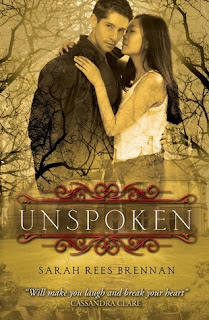 Review:
I was really looking forward to this new release by author Sarah Rees Brennan. I loved the sound of the plot and the cover art is so gorgeous that it drew me in before I’d even turned the first page. I was therefore extremely disappointed when this book didn’t turn out to be half as good as I was expecting.  This has actually proven quite a difficult review to write because I've found it hard to put my finger on exactly what let me down about the story.

As I've mentioned before, one of the main things that makes a book into a winner for me, is a central character who I can engage with and care about. I felt neither of those things for Kami Glass, the main protagonist of ‘Unspoken’. I’m not sure if it’s the way she talks (she sounds much older than a typical teenager) or the way she acts but I couldn’t identify with her at all.  She's quirky and different and I initially liked the bond she had with the voice in her head but as the story went on and she met him in real life it all seemed to fall a bit flat.

On the plus side there is some eye candy to enjoy in the shape of bad boy Jared. He’s both hot and gorgeous and I enjoyed seeing his character develop throughout the story.  He has many secrets which he's hiding but that just meant that it was all the more intriguing waiting to find out what they were.  I would have liked to have seen more of a sense of romance between him and Kami but they have a rather strange first meeting which puts them on the defensive against each other from the start.

Overall, I thought the story started well and I enjoyed the opening but it seemed to drift a bit as the plot got more convoluted.  All the ingrediants I look for in a good story were present with plenty of magic, mystery and intrigue, but not enough to really keep my attention.