I'm a little late posting this but I have some exciting news from Strange Chemistry.  'Blackwood' by Gwenda Bond is going into development with MTV!  I was thrilled to hear about this because I enjoyed reading Gwenda's novel so much and I think it would be amazing translated to the small screen.
You can read my review of the book here 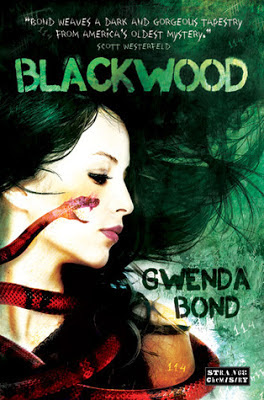 MTV has put in development Blackwood, a drama from Lionsgate Television and Kelsey Grammer’s Grammnet Prods. It is based on the young adult book of the same name by Gwenda Bond, which was published this past September on the Strange Chemistry YA imprint of UK-based science fiction publisher Angry Robot Books. DC Comic book and television writer Peter Calloway (Brothers & Sisters) will write the adaptation.
Blackwood centers on 19-year-old Miranda Blackwood who, when 114 people, including her father, suddenly vanish off Roanoke Island, begins to investigate the mass disappearance, teaming with her high school sweetheart. But she makes a chilling discovery when she uncovers that she’s at the center of not only this mystery, but one that traces back to the first American mystery: the disappearance of 114 people at what would be called The Lost Colony.
Follow Gwenda on Twitter @Gwenda or check out her website
Posted by Samantha (A Dream of Books) at 00:00