Goodreads synopsis:
Waverly and Kieran are finally reunited on the Empyrean. Kieran has led the boys safely up to this point, and now that the girls are back, their mission seems slightly less impossible: to chase down the New Horizon, and save their parents from the enemy ship. But nothing is truly as it seems…Kieran’s leadership methods have raised Seth’s hackles— and Waverly’s suspicions. Is this really her fiancé? The handsome, loving boy she was torn from just a short time before? More and more, she finds her thoughts aligned with Seth’s. But if Seth is Kieran’s Enemy No. 1, what does that make her? 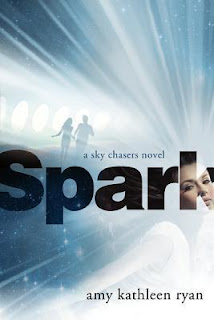 Review:
I loved Amy Kathleen Ryan’s debut novel ‘Glow’ which I read last year and I’ve been eagerly awaiting the next book in the series ever since.

The story catches up with the crew of the Empyrean who are still trying to rescue their parents from onboard the New Horizon. In the meantime, Kieran is in charge of the ship and Waverly is still trying to come to terms with what happened to her onboard the enemy ship.

I ended up feeling very differently about a lot of the characters in this book. My opinion of Seth and Kieran almost changed around completely. Seth is now the one who seems strong and noble and good, whereas Kieran’s actions are often questionable. I went from wanting Kieran and Waverly to be together, to wishing that she would see the real Seth as he seemed much more suitable boyfriend material. I loved the way that Amy Kathleen Ryan isn’t afraid to turn things on their head. Her characters may not always be likeable but that is a quality to be admired because they are always real and like real human beings they make mistakes. They don’t always do the right thing or behave in the correct way.

‘Spark’ is brilliantly plotted, imaginative and original. Every single detail is covered and the plot is forever leading you down a path you are not expecting. The story is also shocking at times and some events had me on the edge of my seat and tearing through the pages to find out what was going to happen next.

The ending was fantastic and has left me eager for the next book, 'Flame' which should be out in 2013.  ‘Spark’ was an out of this world read and I wouldn't hesitate to recommend the Sky Chasers series to anyone looking for a gripping and exciting series of books!
Posted by Samantha (A Dream of Books) at 00:00