Eve and Adam by Michael Grant and Katherine Applegate, published by Electric Monkey on 1st October 2012

Goodreads synopsis:
Sixteen-year-old Evening Spiker lives an affluent life in San Francisco with her mother, EmmaRose, a successful geneticist and owner of Spiker Biotech. Sure, Evening misses her father who died mysteriously, but she’s never really questioned it. Much like how she’s never stopped to think how off it is that she’s never been sick. That is, until she’s struck by a car and is exposed to extensive injuries. Injuries that seem to be healing faster than physically possible.

While recuperating in Spiker Biotech’s lush facilities, she meets Solo Plissken, a very attractive, if off-putting boy her age who spent his life at Spiker Biotech. Like Evening, he’s never questioned anything... until now. Solo drops hints to Evening that something isn’t right, and Emma-Rose may be behind it. Evening puts this out of her mind and begins her summer internship project: To simulate the creation of the perfect boy. With the help of Solo, Evening uncovers secrets so big they could change the world completely. 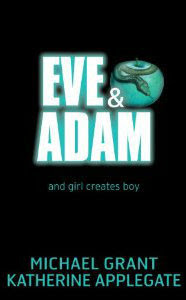 Review:
'Eve and Adam' is written by husband and wife team Michael Grant and Katherine Applegate.  As well as being a huge fan of Grant's Gone series, I have to admit that I was obsessed with the Making Out series by Applegate when I was about 13 or 14.  I still have the complete set and one day I will get around to giving them all a re-read.  Understandably I was therefore pretty excited about this title which combines the writing talent of both authors in one book.

The premise was intriguing and spiked my interest as soon as I read the synopsis. Eve is involved in a terrible car accident which leaves her with severe injuries.  While recovering in her mother's research facility she discovers some disturbing secrets about her mother and the genetic experiments that she has been carrying out.  She also meets a mysterious boy called Solo who lives at the facility and who wants to expose the truths that Eve is only just discovering for herself.  The story was a little slow in the beginning but got much better in the second half of the book and as the plot began to unravel and things got turned on their head.

I really enjoyed the part of the story dealing with Eve's creation of Adam.  This blends in elements of science and genetic modification as well as the possibility of being able to create another human being to your own specifications.  In theory this sounds incredible!  I would love to be able to make someone who has the exact looks and personality that I've chosen.  In reality, Adam doesn't turn out quite as Eve was expecting.

My main criticism of the book was that the characters fell quite flat and I felt so much time was put into the science side of things that the character development suffered.  Personally, I also wasn't feeling the romance which begins to develop between Eve and Solo or even the friendship between Eve and her best friend Aislin.  They were too one-dimensional and I didn't particularly click with any of them.

While 'Eve and Adam' may not have had that 'wow' factor which I was expecting, it was still an enjoyable read based around a great concept.  I definitely want to read the next in the series 'Adam and Eve' when it is published next year.

I'm giving away a paperback copy of 'Eve and Adam' to one lucky winner.  This is open internationally but you must be a follower of my blog to enter.  Just fill out the form below.  Good luck!