Entice by Jessica Shirvington, published by Orchard on 6th September 2012

Goodreads synopsis:
Since Violet Eden discovered she was Grigori - part angel, part human - her world has been shaken to its core. No longer sure who to trust, Violet soon realises that everyone is hiding something. Even her soulmate, Lincoln. Only one thing is certain: dark angel Phoenix has a hold over her more dangerous than ever...

In the race to win the battle against the darkness, Violet's own powers will be pushed to the extreme. And the ultimate betrayal will be revealed. 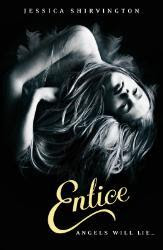 Review:
This is the second book in Jessica Shirvington's series about fallen angels.  With hindsight, I wish that I had read 'Embrace' again prior to starting this one because I think it would have helped to refresh my memory about some of the plot strands.

'Entice' has quite a different mood and tone to the previous book.  Violet is now fully aware of her Grigori heritage which has turned her whole life upside down and changed her relationship with soulmate Lincoln.  She's also trying to deal with the after effects of her romance with Phoenix which is still causing repercussions for herself and her friends.

There's not as much romance in the story as I would have liked to have seen.  We know that Violet and Lincoln should be together even though there are some pretty big obstacles in their path, so I was slightly frustrated that it seemed to take them quite so long to face up to this.  There were a lot of lingering looks and sparks flying between them throughout the book but I really just wanted to see them together as a couple.

The plot itself was at times quite complex.  There's a lot to do with religion and the history of the Grigori so I had to read these parts carefully to ensure that I understood everything properly.  The story was also extremely engrossing and clever and 'Entice' was a great read.  Full of suspense there were several surprises and revelations along the way.

There are plenty more books in this series still to follow, the next being 'Embrace' which I'm hoping will be published in the UK next year.