Today I'm hosting a stop on Jessica Brody's blog tour for her phenomenal book 'Unremembered'.  Jessica was kind enough to answer some of my questions. 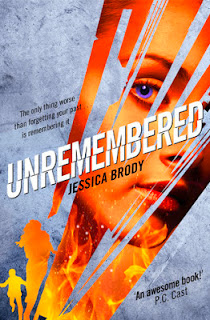 I've just finished reading Unremembered and loved it! What was your inspiration for the book?

Thanks so much! I’m so happy that you enjoyed it! A few years ago, I read a newspaper article about a teen girl who was the sole survivor of a plane crash. I was instantly fascinated by the story. Namely because they had no idea why she survived when no else did. I started brainstorming reasons as to why she was so lucky. One particular reason (a rather intricate, science-fiction-inspired one) stuck in my mind and refused to leave. It continued to grow and blossom until I had an idea for an entire trilogy. A trilogy that starts with a mysterious plane crash and a single survivor.

I can't wait to find out what will happen to Sera and Zen next. Can you give fans any hints?

Tee hee! Let’s see if I can come up with a few good ones without giving away too many spoilers about the first book for those who haven’t yet read it! UNFORGOTTEN begins 6 months after UNREMEMBERED ends. Sera and Zen have been living in the “secret place” that they travel to at the end of book 1. But they soon discover that this “place” isn’t as welcoming as they thought it would be. And the people who are looking for Seraphina have created a unique new “weapon.” One that she will be very difficult for her to defeat.

Phew! That was hard!

Which character in Unremembered did you enjoy writing the most?

I have to say Cody, Seraphina’s 13-year-old foster brother.

This genre was brand new for me. My first time venturing into the world of sci-fi. And as all my contemporaries were comedies, it was oftentimes a challenge for me to write something darker and more serious. Cody, however, is the comic relief of the novel. So writing him was like a little link back to my comfort zone. I always felt like I was “home” when I wrote him. And it gave me the opportunity to make fun of myself a little. While Sera’s storyline is rather dark and mysterious and all these harrowing things are happening to her, Cody can always be counted on to lighten the mood with a comedic crack.

This book is quite a change of pace from your previous work. Why did you decide to write something in this particular genre?

Well, I’ll start off by saying that I definitely didn’t abandon the contemporary genre. It’s still a genre I adore writing and I actually have another contemporary standalone book coming out in the US in Summer of 2015 that will be really fun. But the idea to try my hand at science fiction was really about flexing my creative muscles and seeing how far I could take a character outside of “normal teen life” and still create a compelling emotional journey for her and the reader. In the end, all my books (regardless of genre) tell stories about discovering who you are and dealing with what life brings you (because that’s universal.) In UNREMEMBERED, all I did was insert this struggle into a science-fiction setting where I could exaggerate the “who am I” question. As a writer it’s fun to be able to create an extraordinary world, drop a character in, and see what she does.

During the editing process I imagine that several scenes must have been cut from the book. Which was the hardest to leave out?

Seraphina has many unique, superhuman abilities in this book. There was one scene that I wrote (that I really loved) in which her doctor at the hospital discovers one of these abilities and calls to talk to her about it. It’s how she first discovers this particular ability. (And it’s a cool one!) I eventually ended up cutting it because it just felt like too much. She was already dealing with so much and learning so much about herself that I feared it muddled the story to add another detail at that point. So I cut the scene. But don’t worry, the ability is still there, she’s just not going to discover it until book 2.

Which other titles would you recommend for those that enjoyed Unremembered?

Just the other day I learned a new term: “Biopunk.” I was fascinated when I found it in a review of UNREMEMBERED, since I’d never heard of it before, and immediately had to look up what it meant. It’s essentially a genre of science fiction that focuses on the unintended consequences of human experimentation and biotechnology. Which, in the end, is exactly what UNREMEMBERED is about. I’m excited to be part of this new growing trend in YA literature. And especially excited to be in the company of some amazing authors who, like me, are clearly fascinated by how science can change us, and how it can make for a thrilling story.

Some good ones in the YA genre include: ORIGIN by Jessica Khoury, MILA 2.0 by Debra Driza, BETA by Rachel Cohn, and EVE AND ADAM by Michael Grant and Katherine Applegate.
Posted by Samantha (A Dream of Books) at 01:19