Until now. Because the last secret she shared turned her into a social outcast—and nearly got someone killed.

Now Chelsea has taken a vow of silence—to learn to keep her mouth shut, and to stop hurting anyone else. And if she thinks keeping secrets is hard, not speaking up when she’s ignored, ridiculed and even attacked is worse.  But there’s strength in silence, and in the new friends who are, shockingly, coming her way—people she never noticed before; a boy she might even fall for. If only her new friends can forgive what she’s done. If only she can forgive herself. 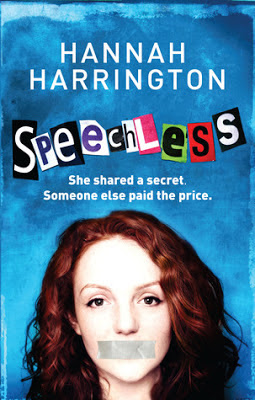 Review:
‘Speechless’ is the first book I’ve read by Hannah Harrington but it certainly won’t be the last! Although the story didn’t win me over entirely, what did impress me was Hannah Harrington’s wonderful writing. I really need to read her debut novel ‘Saving June’ which I’ve heard great things about.

The story revolves around Chelsea Knot who is best friends with the most popular girl in school. One night, she witnesses something at a party which she spills to all of her friends. This leads to a terrible event occurring which she feels responsible for. When she decides to tell the truth about what happened, she ends up being ostracised by those she’d thought were her friends. Understanding that her mouth has run away with her one too many times, she takes a vow of silence.

I didn’t particularly like the character of Chelsea to start with but she grew on me throughout the book. She was genuinely sorry about her part in what happened and she ended up really developing as a person. Given the cold shoulder by the popular kids in school, she is befriended by Asha and Sam. With them, she starts to realise that she can be a better person and through her vow she learns that silence can sometimes be more powerful than words. I loved all the people that Chelsea got to hang out with in the book. Asha is genuinely good and kind and Sam was just adorable. I would have liked both of them as friends. In their own way, they help her to come to terms with her actions and want her to just be herself, rather than who everyone else thinks she should be. They are comfortable and easy for her to be around and they offer her a genuine hand of friendship.

There are many different types of bullying in ‘Speechless’ and it was interesting to see the way in which this was explored.  I definitely think that Chelsea was better off in the end because those who had professed to be her friend at the start really weren't.  Homophobia is another of the main issues and I found some of the characters’ attitudes about this truly shocking and narrow-minded.

'Speechless' is a powerful book with an important message to share.  The idea of having a character who doesn't actually speak was highly original and worked well, but at times I felt like I'd read this kind of story before.  That said, I still really enjoyed it and I'm sure it will appeal hugely to people dealing with similar issues to the characters in the book.
Posted by Samantha (A Dream of Books) at 00:00