Review: Between the Lines - Tammara Webber

Between the Lines by Tammara Webber, published by Penguin on 14th February 2013

Goodreads synopsis:
Young actress Emma is starring in her first ever major film role, opposite well-known teen heart-throb Reid. The exclusive clubs, snapping photographers and screaming fans are all a normal part of life for Reid but it's all new to Emma.The other actors befriend her - and Graham in particular seeks her out - but Emma isn't sure she's really comfortable in this scene. Reid is also experiencing something new - girls throwing themselves at him is an everyday occurrence but genuinely falling for his co-star? That's not what he expected to happen... 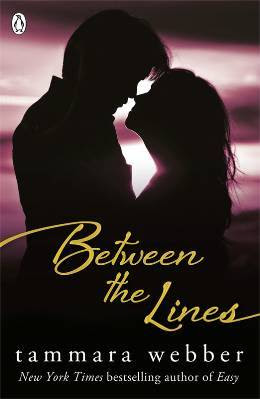 Review:
A few weeks ago I read 'Easy' by Tammara Webber and was completely blown-away by it.  I was therefore very excited to discover that Penguin are publishing more of her books in the UK, including the Between the Lines series.  The first installment focuses on Emma and Reid who are both starring in a modern adaptation of 'Pride and Prejudice', set in a high school.  Cast in the two lead roles, they are thrown together on the movie set.  It looks like life could be mirroring art when Reid sets his sights on Emma but her head may already have been turned by someone else.

The story is told with a dual narrative, providing insights into the lives of both Emma and Reid.  I have to say that I really wasn't a big fan of Reid's at all.  I'm still not sure if I was supposed to have warmed to him by the end of the book or not, but I just found him quite obnoxious and extremely arrogant.  Because he has heaps of screaming female fans literally falling at his feet, he is very self-confident and thinks that he can have anything he wants, including Emma.  There is a twist regarding his character which is revealed near the end of the story but even that wasn't enough to make me change my mind about him.

The other central male figure in the book is Graham, who is also an actor in the film.  My reaction to him was almost the opposite to how I felt about Reid.  Graham came across as kind, caring and sensitive.  He and Emma get on really well and have a strong connection from the start.  He is older than some of the others on the set but he always seems to do and say the right thing and he has real depth and intelligence.  I was rooting for him and Emma the whole way through because they seemed a much, much better match.

I loved the setting for the story and finding out more about the process of film-making.  Interspersed throughout are pages of dialogue from the characters' scripts and this was also a good addition.  Behind the scenes emotions run riot as jealousy, love, hatred and despair all come to the fore.  There are also two really unexpected revelations at the end, which set things up nicely for the next book in the series.

'Between the Lines' was very different to 'Easy' because the tone of the whole book was much lighter.  The story however was still brilliant and I'm excited to find out what is going to happen next.