Lullaby by Amanda Hocking, published by Tor on 6th December 2012

Goodreads synopsis:
Gemma had to disappear with Penn, Lexi and Thea after a night of incredible violence on the island. She can still barely come to terms with her new affinity with the ocean – and the siren powers that go with it. Now she’s been transformed, Gemma has no choice but to leave all she loves behind. She swears she won’t lose her humanity, but the call of the sea is maddening and compulsive.

Harper won’t give up on her missing sister. The search draws her closer than she’d like to bohemian Daniel, but she could really use his help. They’d almost given up, until a small news item tells of a horrific murder in a nearby beach town, and Harper thinks she’s found the deadly group. But can Gemma’s curse be reversed – and what if she doesn’t want to come home? 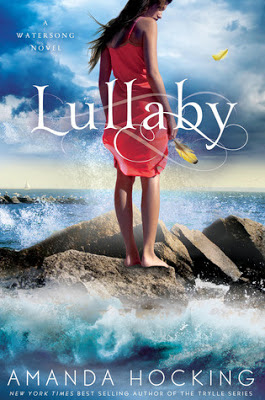 Review:
'Lullaby' is the second book in Amanda Hocking's Watersong trilogy.  The action picks up immediately after the events of 'Wake'.  Harper is desperate to find her sister and rescue her from the clutches of Penn and co, but she has no idea where to start in finding her.  Gemma is trying to face up to her new future, after leaving her family and Alex behind, but is not prepared for life as a siren.

This book was good and an entertaining read but for me, fell short of brilliant.  I enjoyed the story but it did seem quite slow at times and I felt slightly as if not enough actually happened.  This may be because it is the second in the series and Hocking is therefore holding back for an explosive finale.  Whatever the case, I would have liked the pace to have been picked up a bit in places.

The third person narrative is once again split between the two sisters.  Harper is my favourite because I can empathise with her feelings of being the big sister trying to protect her younger sibling.  She would do anything for Gemma and is always looking out for her, so I could understand her desperation in wanting to bring her sister back.  I also loved the growing romance between her and Daniel, which finally starts to flourish in this instalment.  Although she has never really been interested in the opposite sex, he definitely gets under her skin and she is attracted to him, even though she finds it hard to admit that to herself.

The passages of the book focusing on Gemma were interesting because I got to learn more about the history and mythology of the sirens themselves.  This is one of the best aspects of the series.  The curse seems pretty unbreakable but there are hints that there may be a way for Gemma to free herself.  I liked getting to know more about Penn, Lexi and Thea too, particularly the latter who didn't seem quite so evil after all.

'Lullaby' didn't pull me in as much as I thought it was going too but I'm still suitably intrigued to know what will happen to the characters next so I will definitely be reading the conclusion of the series 'Tidal'.
Posted by Samantha (A Dream of Books) at 00:00