Goodreads synopsis:
Everybody thinks Cate Cahill and her sisters are eccentric. Too pretty, too reclusive, and far too educated for their own good. But the truth is even worse: they're witches. And if their secret is discovered by the priests of the Brotherhood, it would mean an asylum, a prison ship--or an early grave. Then Cate finds her mother's diary, and uncovers a secret that could spell her family's destruction. Desperate to find alternatives to their fate, Cate starts scouring banned books and questioning rebellious new friends, all while juggling tea parties, shocking marriage proposals, and a forbidden romance with the completely unsuitable Finn Belastra. But if what her mother wrote is true, the Cahill girls aren't safe--not even from each other. 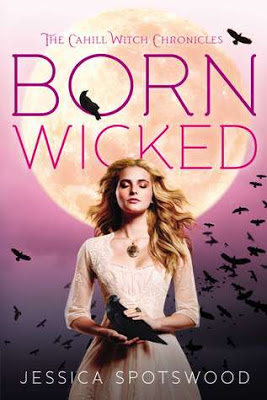 Review:
'Born Wicked' is a fantastic read about three sisters who also happen to be witches.  This is a secret that they must keep even from their father, because it would be far too dangerous for them if the truth was ever discovered.  With no mother to guide them, the oldest sister Cate vows to look after and protect her younger siblings from the Brotherhood, who arrest anyone they suspect to be a witch.  When a new governess arrives to look after them, Cate tries to safeguard their secret but the discovery of a prophecy in her mother's journal about three sisters, puts their future in jeopardy.

If you love witchy stories then you definitely need to pick up this title!  It only took me a few pages to become hooked and then I found it nearly impossible to put down.  Because of the period in which it is set, there is a culture of fear created by The Brotherhood, who warn people against anything to do with witchcraft.  They lecture the town's people regularly about the evils of magic, as well as the fact that women should be obedient to men and often force young girls into marriage.  Cate is headstrong and wishes to choose her own path but wonders whether she would be safer marrying the handsome Paul who she grew up alongside.

I quite liked Paul to start with but my heart was most definitely won over by Finn Belastra, the gorgeous gardener, whose family also owns and runs the local bookshop.  He's intelligent and bookish and utterly wonderful!  I thought he was a much better match for Cate because he treated her like an equal.  He is also fiercely protective of his mother and sister and would do anything for them.  There is one particular scene (those of you who have read it will immediately know which one I'm talking about!) which set my heart fluttering wildly.  It was beautifully written and my favourite moment of the whole book.

Cate and her sisters Tess and Maura each have very different personalities.  I enjoyed reading about each of them, although Cate was my favourite.  Because of their shared secret they are extremely close but don't necessarily have the same plans for their future.  Due to the discovery of an unexpected revelation in the prophecy, it will be interesting to see what happens to this sibling bond in the next instalment of the trilogy.

Because this is a book about witches I was expecting it to verge on the side of the paranormal, but in reality, it actually often came across more as historical fiction which I liked.  There are quite a lot of magical occurences which take place throughout the story but this never distracted from the plot and the character development which was brilliantly executed.

I'm really looking forward to the story continuing in 'Star Cursed' which will be published in the UK by Puffin in 2014.