A Witch Alone by Ruth Warburton, published by Hodder on 7th February 2013

Goodreads synopsis:
Where do you go when your heart has been ripped out?

For Anna there is only one answer; into her past, where the truth about her mother, her power, and her real identity lie hidden.

But as Anna delves deeper into her history, she begins to fear that the truth about what set her mother running may be darker than she ever suspected. With the witches of the world on the brink of war, Seth gone, and her friend Abe wanting more from her than she can possibly give, Anna is in crisis.

As the clouds around her gather, Anna is torn between friends, family and rival tribes of witches and – at the last – between love and magic. 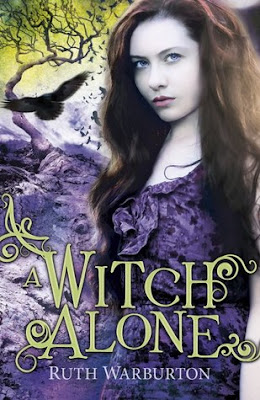 Review:
'A Witch Alone' is the third and concluding part of Ruth Warburton's trilogy about Anna Winterson, a teenage witch.  I have read a lot of young-adult series and I have to say, hand on heart, that this is one of my favourite.  I have adored each instalment and will definitely be picking them off my shelves to read again and again.

After the ending of 'A Witch in Love', Anna wants to find out what really happened to her mother.  She is also desperately trying to work out her own place and where she belongs.  She thought she belonged with Seth but now she's struggling to make sense of her life without him.  I adore Anna and Seth as a couple but they have always had hanging over them the love spell that Anna originally cast over him.  This book finally puts that to rest in the most spectacular way.  If you're a fan of these two characters then you will not be disappointed.  I must admit that I wasn't too happy about the direction that things seemed to be taking in the previous book, with the introduction of Abe as a potential love rival.  I needn't have worried about this though because Ruth Warburton deals with it perfectly and this is most definitely not your typical ya love triangle.

If I had to be picky about anything, it would probably be that I wished there was more Seth in the book.  Although he does feature quite prominently in the second-half, he doesn't make much of an appearance at the start and I missed him!  This was however necessary to the plot so I guess I can't complain too much.  Readers are also treated to a fantastic chapter between him and Anna (if you've read the book then you'll know which one I mean and if you haven't then I won't spoil it for you) which was one of my all-time favourite moments.

The ending was incredible and had me glued to the pages.  I actually had to stay up half the night to finish it because I was so engrossed.  There are elements which will appeal to everyone and I loved the fact that it doesn't necessarily tie everything up with a neat bow.  It's much more realistic but also remains true to the characters and the story.

Full of action, excitement, magic and romance, this was the perfect end to the series.  I'm so sad that it's all over but also excited because I cannot wait to see what Ruth Warburton will write next.  I shall be the first in the queue to get my hands on a copy.  A wonderful British author and a five star series.  These books are definitely not to be missed!
Posted by Samantha (A Dream of Books) at 00:00