Goodreads synopsis:
Judith Rashleigh has made it. Living in luxury amidst the splendours of Venice, she's finally enjoying the life she killed for.  But someone knows what Judith's done.

Judith can only save herself by finding a priceless painting - unfortunately, one that she's convinced doesn't even exist.  And she's not the only one seeking it.

This time, Judith isn't in control. Outflanked and out-thought, outrun and outgunned, she faces an enemy more ruthless and more powerful than she ever imagined.

And if she doesn't win, she dies. 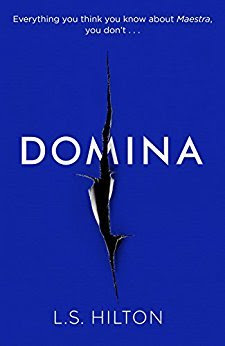 Review:
The opening prologue of 'Domina' knocked my socks off and led me to expect great things from the rest of the book.  Sadly, the reality was that I felt quite disappointed by the time I got to the very end.

An early disclaimer to this review is that I have not read the first book in the series, 'Maestra'. I didn't think that it would matter and I thought that I would be able to follow the plot regardless, but there were so many references to things that had previously happened to the main character Judith, that I struggled to get to grips with everything.  I would definitely advise starting at the beginning of the series.

I assumed that this would be a tense and taut thriller.  Exactly what I was in the mood for.  It turned out to be much slower and more sedate than I first thought and quite a struggle to get through.  I was excited to see that it was partly set in the art world which I was expecting to be really fascinating but instead it almost seemed to hold back the pace of the plot with too many details and references for my taste. What I also didn't like were the lurid sex scenes and the overly graphic nature of the book.

The main protagonist Judith was an extremely love/hate character.  I actually quite liked her in the beginning but my respect for her dwindled as the story progressed and I didn't know what to make of her by the end.  I liked the flashbacks to her early life with her mother as I thought these helped to show how she had developed the fighting side of her character.

The story ended on a cliff-hanger which made me wonder a little about what was going to happen next.  Although I don't think that this series is for me, I may be tempted to read the final book in the trilogy 'Ultima' but only if I get around to reading 'Maestra' first.
Posted by Samantha (A Dream of Books) at 00:00