Goodreads synopsis:
It is the autumn term and Greer MacDonald is struggling to settle into the sixth form at the exclusive St. Aidan the Great boarding school, known to its privileged pupils as S.T.A.G.S. Just when she despairs of making friends Greer receives a mysterious invitation with three words embossed upon on it: huntin' shootin' fishin'. When Greer learns that the invitation is to spend the half term weekend at the country manor of Henry de Warlencourt, the most popular and wealthy boy at S.T.A.G.S., she is as surprised as she is flattered.

But when Greer joins the other chosen few at the ancient and sprawling Longcross Hall, she realises that Henry's parents are not at home; the only adults present are a cohort of eerily compliant servants. The students are at the mercy of their capricious host, and, over the next three days, as the three bloodsports - hunting, shooting and fishing - become increasingly dark and twisted, Greer comes to the horrifying realisation that those being hunted are not wild game, but the very misfits Henry has brought with him from school... 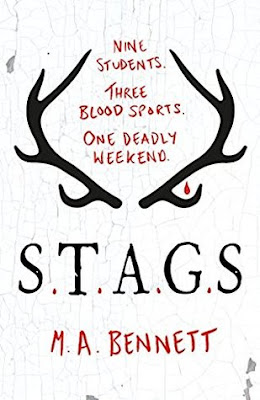 Review:
I've wanted to read 'S.T.A.G.S' for ages.  As soon as I heard about it I was interested and intrigued.  I was expecting this to be an edge of your seat thriller, set at a creepy boarding school but that's not quite what was delivered.  My overall impression at the end was that this book could have been so good but sadly veered towards being a bit safe rather than pushing the boundaries.

The main character Greer is first introduced as a new scholarship student at St Aidan the Great boarding school.  Isolated and friendless, she struggles to fit in, until she is invited by the Medievals to an annual weekend of huntin', shootin' and fishin'. The Medievals rule the school and as Greer already has a crush on Henry, she agrees to go along.  Henry's home, Longcross, is actually the main setting for the story, rather than the school itself, which was a shame as I love boarding school stories.

Greer is joined by two other pupils of the school, as they begin their weekend with the Medievals, without any parental supervision.  She admits at the very beginning of the book that she, along with the other two, are murderers.  You don't know yet who they are supposed to have killed but as the story unravelled, I had a very good idea who it was going to be.

I would really have loved to have seen a lot more action, danger and excitement than there actually was.  It felt all the time like the author was playing things safe.  There's a reference in the book to Agatha Christie's And Then There Were None which is bone chillingly scary because the characters get picked off one by one and meet some awful fates.  I was expecting 'S.T.A.G.S' to be along these lines but instead it felt a bit like extreme bullying but not life and death by any means.

The book was an enjoyable enough read and the ending was very good but it could have been a lot more tense and thrilling than it turned out to be.