Breaking by Danielle Rollins, published by Bloomsbury on 10th August 2017

Were they keeping secrets? Could Charlotte be the reason they did it? Because Charlotte has a secret of her own, and now she must decide how much she will risk to discover the truth. 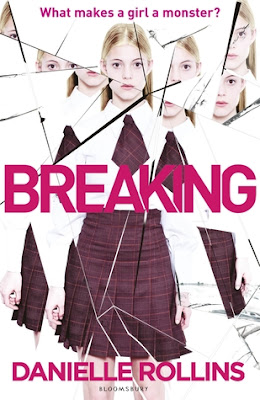 Review:
'Breaking' was a brilliant read, very fast-paced and exciting with a killer twist at the end.

The story is set at a boarding school called Underhill Preparatory Institute.  Main character Charlotte, is a pupil at the school but has never been good enough or clever enough to satisfy her mother who is always pushing Charlotte to study more and get better grades. Although the relationship between her and her mother is strained, she has her two best friends by her side and with them she feels like she finally has a family.

Her best friends however, both die in strange circumstances.  Charlotte is desperate to find out what really happened to Ariel and Devon but her investigation puts her in danger, as she begins to get closer and closer to the truth.  The tension builds gradually, as flashbacks reveal more about the three friends and clues are revealed that point to the fact that there may be more to their deaths than first suspected.

Gorgeous Jack who was dating Charlotte's best friend Ariel, has a bigger role to play in the second half of the book and I thought he made a great supporting player.  I was never quite sure whether he could be trusted or not and how he was involved in the mystery surrounding the school.

The last few chapters had me absolutely hooked and I had to stay up late to finish the story.  The end has left me with high hopes that there might be a sequel.  If so, I most definitely want to read it, as well as any other offerings by Danielle Rollins in the future.  An addictive read with a killer twist that I thoroughly enjoyed.