The Girl From Summer Hill by Jude Deveraux, published by Headline Eternal on 2nd May 2017

Goodreads synopsis:
Enter Elizabeth Bennet. Chef Casey Reddick has had it up to here with men. Arriving in the charming town of Summer Hill, Virginia, peace and quiet on the picturesque Tattwell plantation is just what she needs. But the tranquillity is broken one morning when she sees a gorgeous naked man on her porch.

Enter Mr. Darcy. What Tate Landers, Hollywood heartthrob and owner of Tattwell, doesn't need on a bittersweet trip to his ancestral home is a woman spying on him. His anger, which looks so good on the screen, makes a bad first impression on Casey - and she lets him know it.

The plot thickens. Sparks fly when Casey is recruited to play Elizabeth Bennet opposite Tate's Mr. Darcy in a stage adaptation of Pride and Prejudice. As they spar on and off stage, Casey begins to think she's been too quick to judge. But then Tate's handsome ex-brother-in-law, Devlin Haines, who is playing Wickham, tells Casey some horrifying stories about the man she's falling for. Casey needs to figure out who to believe. Is the intense, undeniable chemistry between her and Tate real, or is this just a performance that ends when the curtain falls? 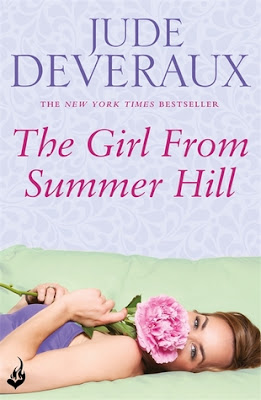 Review:
This is the first book I've read by author Jude Deveraux.  I was sold on the description of this as a modern day retelling of 'Pride and Prejudice', which is one of my favourite classic novels.  Set in the small town of Summer Hill, it draws on the idea of a group of local townspeople staging a production of the novel.  Cue all the main characters who fit neatly into the roles of Austen protagonists.  I thought that this was a great twist and I applaud Deveraux for having a go at tackling a contemporary version of such a beloved story.

Casey, the main character, is a chef but also ends up playing the part of Elizabeth and acting opposite Hollywood heartthrob, Tate Landers, as Mr Darcy.  The opening scene in the book between Casey and Tate is one of the best starts to a romantic novel I have ever read.  Sparks fly between the two from their very first encounter and I have to say that it grabbed my attention in all the right ways.  I was definitely keen to read on and see how the rest of the story was going to unfold.

'The Girl From Summer Hill' was a fun, light and enjoyable read.  There weren't too many surprises along the way and obviously it wasn't hard to work out how everything was going to end but I enjoyed it regardless.  I adored the setting as small town communities are something that always appeal to me and I thought that the love/hate relationship between Casey and Tate was brilliantly written and fun to read about.

I'm excited that this is the first in a series and I'm looking forward to reading more by Jude Deveraux.